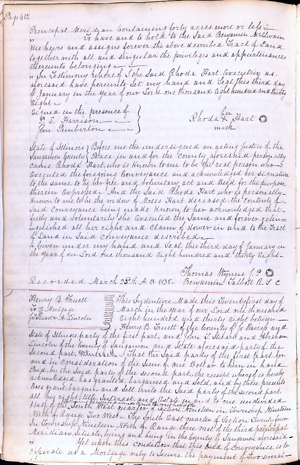 Mortgage Deed of Henry B. Truett to John T. Stuart and Abraham Lincoln, 21 March 1838
This Indenture Made this Twentyfirst day of March in the year of our Lord one thousand Eight hundred and thirty Eight between— Henry B. Truett of the County of Jo Daviess and State of Illinois, party of the first part, and John T. Stuart and Abraham Lincoln of the County of Sangamon and State aforesaid party of the Second part, Witnesseth— That the Said party of the first part, for and in consideration of the Sum of one Dollar, to him in hand Paid, by the Said party of the second part, the receipt whereof is hereby acknowledged, has granted, bargained and Sold, and by these presents Does grant, bargain and Sell unto the Said party of the second part, all his right, title, Interest, and Estate in and to one undivided Half of the ^Following described Lands to wit the West half of the^ South West quarter of Section Nineteen in Township Nineteen North of Range Two West— The South East quarter of Section Twenty four In Township Nineteen North of Range three West of the third principal Meridian, Situate, lying and being in the County of Sangamon aforesaid—1
”Yet upon this condition that this Deed of conveyance is to opperate as a Mortgage only to Secure the payment of Two several
<Page 2>
Promissory notes of even date herewith, one payable to the Said John T. Stuart, the other to the Said Abraham Lincoln, both Executed by the Said Henry B. Truett, both due Six months after date, and each for the sum of Two Hundred and fifty Dollars, and which if paid according to their Tenor and Effect this Deed of Conveyance is to be Null and void, otherwise to remain in full force and effect—
”In Testimony whereof the Said Party of the first part has hereunto Set his hand and Seal the day and year above written—
Henry B. Truett  seal
[certification]
03/21/1838
Clement, Benjamin S.
State of Illinois
Sangamon County
Before me the undersigned one of the Justices of the Peace in and for the county aforesaid Personally came Henry B. Truett who is personally Known to me to be the Real person by whom and in whose name the foregoing conveyance was Executed, and acknowledged his Signature thereto to be his free and voluntary act and Deed for the purpose therein Expressed—
”Given under my hand and Seal this Twenty first day of March in the year of our Lord one thousand Eight hundred and thirty Eight—
Benj. S. Clement J. P.[Justice of the Peace]  seal
[docketing]
03/23/1838
Talbott, Benjamin
Recorded March 23d A.D. 1838—
Benjamin Talbott R.[Recorder] S. C
[endorsement]
08/22/1838
2
1This property was located in what would become Logan County, southeast and southwest of Lincoln.
“Counties, Townships, and Ranges in Illinois,” Maps, Martha L. Benner and Cullom Davis et al., eds., The Law Practice of Abraham Lincoln: Complete Documentary Edition, 2d edition (Springfield: Illinois Historic Preservation Agency, 2009), http://www.lawpracticeofabrahamlincoln.org/Reference.aspx?ref=Reference html files/LandMeasurement.html.
2Acknowledgment of $500 payment of mortgage by William L. May for Henry B. Truett, written by Lincoln, dated 22 August 1838, has been clipped from the left margin.