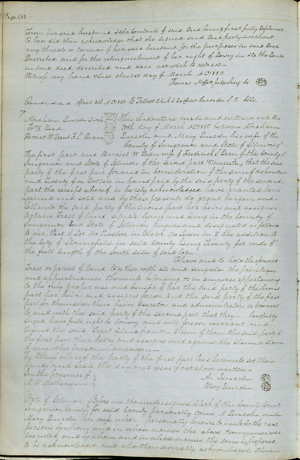 Deed of Abraham Lincoln and Mary Lincoln to Frederick S. Dean and Harriet W. Dean, 30 March 18501
This Indenture2 made and entered into this 30th day of March AD 1850. between Abraham Lincoln and Mary Lincoln his wife of the County of Sangamon and State of Illinois of The first part, and Harriet W. Dean wife of Frederick S. Dean of the County of Sangamon and State of Illinois of the second part Witnesseth, that the said party of the first part for and in Consideration of the sum of one hundred and Twenty five Dollars in hand paid by the said party of the second part the receipt whereof is hereby acknowledged have granted bargained and sold and by these presents do grant bargain and Sell unto the said party of the second part her heirs and assigns a Certain Tract of land situate lying and being in the County of Sangamon And State of Illinois known and designated as follows to wit– Part of Lot No Twelve in Block No Seven in E Iles addition to the City of Springfield in said County being Twenty feet wide of the full length of the South side of said lot–3
To have and to hold the aforesaid Tract or parcel of land together with all and singular the privileges and appurtenances thereunto belonging or in anywise appertaining to the only proper use and benefit of her the said party of the Second part her heirs and assigns forever And the said party of the first part for themselves their heirs Executors and administrators do Covenant to and with the said party of the second part that they... lawfully Seized have full right to Convey and will forever warrant and Defend the said Tract of land from the Claim of them the said party of the first part their heirs and assigns and against the Claim or Claims of any other person whomsoever–
In Witness whereof the party of the first part has hereunto set their hands and Seals the day and year first above written–4
A. Lincoln  seal Mary Lincoln  seal
[certification]
Matheny, Noah W.
In the presence of
N W Matheny–
[certification]
03/30/1850
Matheny, Noah W.
Before me the undersigned Clerk of the County Court for said County personally came A Lincoln and Mary Lincoln his wife who.. personally known to me to be the real persons by whom and in whose names the above conveyance was Executed and by whom and in whose names the same is proposed to be acknowledged and who then severally acknowledged their
<Page 2>
Signatures thereto to be their free and voluntary act and deed for the purpose therein expressed. And the said Mary Lincoln wife of the said A Lincoln being by me first examined separately and apart from her said husband and the Contents of said Conveyance being first made known to her acknowledged that freely and voluntarily and without any Compulsion or Coercion from her said husband she executed the same and forever relinquishes all her right and Claim of Dower in and to the lands and Tenements in said Conveyance described5
seal
In Testimony whereof I have hereunto Subscribed my name and affixed the Seal of my office at Springfield this 30th day of March in the year of our Lord one thousand eight hundred and fifty–
N. W. Matheny Clerk
[certification]
04/06/1850
Talbott, Benjamin
Recorded April 6th AD 1850.
B. Talbott Clerk & Ex officio Recorder S C Ills
1Benjamin Talbott recorded this deed. Abraham Lincoln did not sign his name.
2Historically, the word “indenture” referred to the crimps made in the original and copies of a document to prove the authenticity of the copies at a later date. Eventually, the word became synonymous with deeds, and particularly to real property transaction deeds in which both parties assumed obligations, which is the context within which the word is used here.
“Indenture,” Reference, Glossary, Martha L. Benner and Cullom Davis et al., eds., The Law Practice of Abraham Lincoln: Complete Documentary Edition, 2d edition (Springfield: Illinois Historic Preservation Agency, 2009), http://www.lawpracticeofabrahamlincoln.org/Reference.aspx?ref=Reference%20html%20files/Glossary.html.
3Lincoln purchased lots twelve and thirteen in block seven of the Iles’ Addition to Springfield from Elijah and Malinda Iles on June 2, 1838. These lots were in the center of the block across the street from the property Lincoln purchased in 1844 on which he built his house.
Deed of Elijah Iles and Malinda Iles to Abraham Lincoln; Harry E. Pratt, The Personal Finances of Abraham Lincoln (Springfield, IL: Abraham Lincoln Association, 1943), 60.
4Frederick S. and Harriet W. Dean constructed a house on this lot, becoming the Lincoln’s neighbors. The Dean House is located at 421 South Eighth Street.
On March 2, 1853, the Lincolns sold the north half of lot twelve and lot thirteen to Alexander Graham for $375.
Deed of Abraham Lincoln and Mary Lincoln to Alexander Graham; Albert W. Banton, Jr., Ellen Carol Balm, and Jill York O’Bright, “Historic Resource Study and Historic Structures Report: Blocks 7 and 10, Elijah Iles’ Addition, Springfield, Illinois,” (Springfield: Lincoln Home National Historic Site, 1987), 215; Harry E. Pratt, The Personal Finances of Abraham Lincoln, 60.
5“Dower” is a term that refers to the legally protected lifetime right of a woman to one-third of her husband’s lands and personal property. Dower was intended to provide for the support of a widow and her children. Because of this, a husband could not convey property without the consent of his wife.
Christopher A. Schnell, “Wives, Widows, and Will Makers: Woman and the Law of Property,” In Tender Consideration: Women, Families, and the Law in Abraham Lincoln’s Illinois, ed. by Daniel W. Stowell (Urbana: University of Illinois Press, 2003), 129, 133; Joan R. Gundersen, “Women and Inheritance in America,” Inheritance and Wealth in America, ed. by Robert K. Miller Jr. and Stephen J. McNamee (New York: Springer Science and Business Media, 1998), 94.