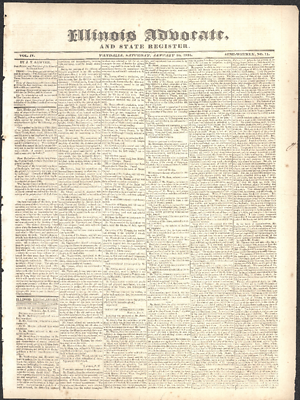 Summary of Legislative Debate regarding the Surveyor of Schuyler County, 6 January 18351
Mr. Vandevender offered a resolution, requiring the House to pronounce the office of county surveyor not vacant, at the time when a nomination was made by the House, to fill said office.
Mr. Vandevender, apologized to the House for announcing a vacancy in that office, when, (as he had since ascertained,) there was in reality no vacancy.2
Mr. Thomas, offered an amendment to the Resolution.
Mr. Webb said, It was true a new surveyor had been appointed, but as surveyors hold their offices during good behavior, and as mistake, not misbehavior, had caused the old surveyor to be superseded by a new one, it followed that the old surveyor was in reality, the only officer the law could recognize; and if the new one should attempt to act in the office, he could be removed by a Quo. warranto.
Mr. Lincoln said, That if, as appeared to be the opinion of legal gentlemen, there was no danger of the new surveyor’s ousting the old one so long as he persisted in refusing to die—he would suggest the propriety of letting matters remain as they were, so that if the old surveyor should hereafter conclude to die, there would be a new one ready made without troubling the legislature.
Mr. Stuart offered an amendment to said resolution, striking out all after the word Resolved, and inserting a provision requiring the House to rescind their nomination to that office, and requesting the Senate to rescind their appointment; said amendment was concurred in, and
On motion of Mr. Thomas, the resolution was laid on the table.
1This summary comes from the Illinois Advocate, a Democratic newspaper published in Vandalia. Another summary comes from the Sangamo Journal, a Whig-leaning newspaper published in Springfield.
2William P. Manlove had been county surveyor since 1829. On December 24, 1834, the House of Representatives passed a resolution nominating Samuel McHatton as the county surveyor. The Senate had confirmed the nomination on December 26. Unbeknownst to the House and Senate, Allen Persinger had apparently already replaced Manlove, and was still operating as county surveyor. Manlove died in 1835.
Illinois House Journal. 1835. 9th G. A., 1st sess., 158; Illinois Senate Journal. 1835. 9th G. A., 1st sess., 136-37; Combined History of Schuyler and Brown Counties, Illinois (Philadelphia: W. R. Brink, 1882), 80, 112, 376; Gravestone of William P. Manlove, Round Prairie Cemetery, Birmingham, IL.

Summary of Legislative Debate regarding the Surveyor of Schuyler County. [1835-01-06]. /documents/D200045b. The Papers of Abraham Lincoln Digital Library.