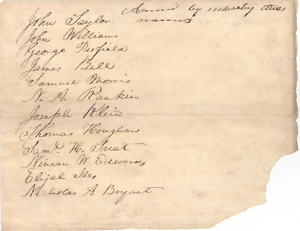 Amendment to “A Bill to Incorporate the Sangamon Fire Insurance Company,” [18 December 1835]
1
Amend by inserting these names
John Taylor.
John Williams
George Pasfield
James Bell
Samuel Morris
N. A. Rankin
Joseph Klein
Thomas Houghan
Saml H. Treat
Ninian W Edwards
Elijah Iles
Nicholas A. Bryant
1Abraham Lincoln wrote only the names on this document.
On December 8, 1835, William C. Carpenter introduced a resolution in the House of Representatives to appoint a committee to inquire into establishing a railroad from Springfield to the southern termination of the Wabash and Erie Canal. On December 17, the committee reported to the House HB 37, originally titled “A Bill to Incorporate a Company therein Named.” The House referred the bill to a select committee. On December 18, the select committee reported back the bill with amendments, one of which was this one authored by Lincoln. The House approved the amendments and on December 22, the House passed the bill as amended. Afterward, on Lincoln’s motion, the title was changed to “A Bill to Incorporate the Sangamon Fire Insurance Company.” On December 31, the Senate amended the bill by striking out “Nicholas A. Bryant” in the first section. On January 2, 1836, the Senate passed the bill. On January 7, the Council of Revision approved the bill and the act became law.
Illinois House Journal. 1835. 9th G. A., 2nd sess., 23-24, 79, 96, 124, 217, 241, 248, 260; Illinois Senate Journal. 1835. 9th G. A., 2nd sess., 95, 139, 157, 179, 180, 198.

Amendment to “A Bill to Incorporate the Sangamon Fire Insurance Company”. [1835-12-18]. /documents/D200068. The Papers of Abraham Lincoln Digital Library.