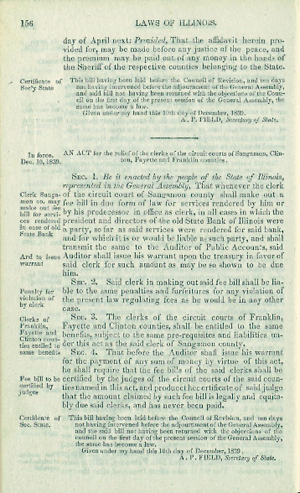 In force, Dec.[December] 10, 1839.
AN ACT for the relief of the clerks of the circuit courts of Sangamon, Clinton, Fayette and Franklin counties.
Clerk Sangamon co. may make out fee bill for services rendered in case of old State bank
And to issue warrant
Sec.[Section] 1. Be it enacted by the people of the State of Illinois, represented in the General Assembly, That whenever the clerk of the circuit court of Sangamon county shall make out a fee bill in due form of law for services rendered by him or by his predecessor in office as clerk, in all cases in which the president and directors of the old State Bank of Illinois were a party, so far as said services were rendered for said bank, and for which it is or would be liable as such party, and shall transmit the same to the Auditor of Public Accounts, said Auditor shall issue his warrant upon the treasury in favor of said clerk for such amount as may be so shown to be due him.
Penalty for violation of by clerk
Sec. 2. Said clerk in making out said fee bill shall be liable to the same penalties and forfeitures for any violation of the present law regulating fees as he would be in any other case.
Clerks of Franklin, Fayette and Clinton counties entiled to same benefits
Sec. 3. The clerks of the circuit courts of Franklin, Fayette and Clinton counties, shall be entitled to the same benefits, subject to the same pre-requisites and liabilities under this act as the said clerk of Sangamon county.
Fee bill to be certified by judges
Sec. 4. That before the Auditor shall issue his warrant for the payment of any sum of money by virtue of this act, he shall require that the fee bills of the said clerks shall be certified by the judges of the circuit courts of the said counties named in this act, and producethecertificate of said judge that the amount claimed by such fee bill is legally and equitably due said clerks, and has never been paid.
[certification]
12/10/1839
Field, Alexander P.
Certificate of Sec. State.
This bill having been laid before the Council of Revision, and ten days not having intervened before the adjournment of the General Assembly, and the said bill not having been returned with the objections of the council on the first day of the present session of the General Assembly, the same has become a law.
Given under my hand this 10th day of December, 1839.
A. P. FIELD, Secretary of State.

An Act for the Relief of the Clerks of the Circuit Courts of Sangamon, Clinton, Fayette and Franklin Counties. [1839-12-09]. /documents/D200160c. The Papers of Abraham Lincoln Digital Library.