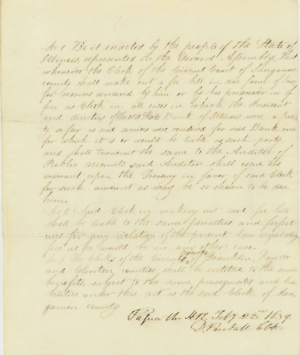 Sec[Section] 1 Be it enacted by the people of the State of Illinois, represented in the General Assembly, That whenever the Clerk of the Circuit Court of Sangamon county shall make out a fee bill in due form of law, for services rendered by him or by his predecessor in office as Clerk, in all cases in which the President and directors of the old State Bank of Illinois were a party, so far as said services were rendered for said Bank and for which it is or would be liable as such party, and shall transmit the same to the Auditor of Public accounts, said Auditor shall issue his warrant upon the Treasury in favor of said Clerk for such amount as may be so shown to be due him.
Sec 2 Said Clerk in making out said fee bill shall be liable to the same penalties and forfeitures for any violation of the present law regulating fees as he would be in any other case.
Sec 3 The Clerks of the Circuits ^courts^ of Franklin, Fayette [,]and Clinton counties shall be entitled to the same benefits, subject to the same prerequisites and liabilities under this act as the said Clerk of Sangamon county.
[certification]
02/23/1839
Prickett, David (Pricket)
Passed the H. R. Feby 23rd 1839.
D. Prickett Clk[Clerk]
<Page 2>
[docketing]
√
[docketing]
H. R. No 222
[docketing]
A Bill for an act for the relief of the Clerks of the Circuit Courts of Sangamon, ^Clinton[,] Fayette, & Franklin &^ Countys
[docketing]
[03]/[02]/[1839]
Prickett, David (Pricket)
to be Enrolled as amended.
Clk. H. R.
[docketing]
2
[docketing]
[03]/[01]/[1839]
Sel Com[Select Committee]
Fletcher
Parish
Thomas
[docketing]
[02]/[19]/[1839]
Engrossed
[docketing]
[03]/[01]/[1839]
Indef postponed
[docketing]
[03]/[02]/[1839]
passed as amended

A Bill for the Relief of the Clerks of the Circuit Courts of Clinton, Fayette, Franklin, and Sangamon Counties. [1839-02-23]. /documents/D200160b. The Papers of Abraham Lincoln Digital Library.