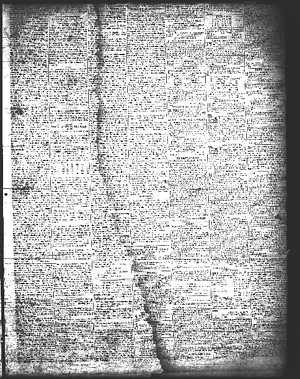 Proceedings of Whig Meeting in Hall of House of Representatives regarding Present Administration, 27 February 18391
WHIG MEETING OF THE MEMBERS OF THE LEGISLATURE.
At a meeting of the opponents of the present Administration, of the General Government held in the Hall of the House of Representatives pursuant to public notice on Wednesday evening the 27th inst.2
On motion of Col.[Colonel] Wm. H. Davidson, Col.H. J. Mills was appointed presiding, officer of said meeting.
On further motion Gen. J. B Moore and Col. Jas. Black were appointed Vice Presidents[?]
On motion of Jno. J. Hardin, Esq.[Esquire], Jno. H. Murphy and J. W. Fell, were appointed Secretaries.
Mr. Lincoln briefly explained the object of the meeting, and was followed by O. H. Browning, Esq.[Esquire], who made some further explanatory remarks, and in conclusion offered the following preamble and resolutions which were unanimously adopted:
Whereas, the present administration party in the United States, whilst professing to be advocates of economy, and whilst declaiming in favor of “retrenchment and reform,” have increasd the expenditures of the national government from thirteen millions, to forty millions of dollars per annum; bankrupted the public treasury, which but a few years since was overflowing with surplus revenue, and actually involved the nation in a large debt to raise the means of paying the salaries of officeholders; and by a profligate expenditure of public money, and the multiplication of offices, and officers, so corrupted the public functionaries of the government, that they unblushingly, and with impunity, pilfer the public money, and commit robberies upon the treasury (for which private individuals would be branded with lasting infamy, and consigned to the cells of a penitentiary) as is evidenced by the fact that one sub-treasurer alone has eloped with enough of the people’s money in his pockets, obtained in the name of democracy, to purchase houses for twenty-six thousand poor families, whilst thousand of smaller sub-treasurers are flying in every direction, with smaller sums obtained the same way;3 and whereas the great whig and conservative parties of the Union believe that the PEOPLE will rise omnipotent with honesty, and rebuke the corruptions of executive patronage and power, and assist in re-establishing plain republican principles, and practics; and whereas we believe that the republican principles of the government cannot be maintained in their purity, as established and practised by Washington, Jefferson, Madison, and their compatriots, without a change in the present administration of the affairs of the nation; and whereas we have confidence in the patriotism, wisdom and integrity of the great Whig and Conservative parties, and believe that they will not present to the American people, as a candidate for the Presidency, any man who is not eminently qualified for that station by his talents, attainments, his integrity of purpose, his devotion to republican principles, and his attachment to the Union, therefore,
Resolved, That we will unitedly, and zealously support for the next presidency the man who may be presented by the Whig and Conservative parties as the opposing candidate to the present incumbent, Martin Van Buren.
Resolved, That we earnestly recommend to our fellow citizens of the State of Illinois, opposed to the present administration of the national government, and in favor of reform, to sacrifice upon the altar of their country’s good, all prejudices and predilictions for or against particular individuals; to come to the rescue of the nation; to do battle for principles and not men; and to unite with us in supporting for the next presidency, the man who shall be presented as the opposing candidate to Martin Van Buren.4
A. Lincoln, Esq., offered the following resolution which was adopted:
Resolved, That a Committee of nine be appointed by the chair, to draft an address to the people of this State, setting forth the causes of our opposition to the present administration, and recommending all the opponents of the Misrule of the government to unite upon the common platform of Union and compromise.
In pursuance of the above resolution the Chair appointed A. Lincoln[,] O. H. Browning, W. F. Thornton, W. H. Davidson, A. Williams, R. B. Servant and W. Ross, Esqr’s[Esquires] said committee.5
Col. R. B. Servant offered the following resolution which was adopted:
Resolved, That the proceedings of this meeting be signed by the President, Vice Presidents, and Secretaries, and published in the Vandalia Free Press, with a request that all the Whig papers in the State will copy them.
On motion of O. H. Browning, the meeting adjourned.
H. J. MILLS, Pres’t[President],
1Abraham Lincoln attended this meeting and moved adoption of the third resolution.
2Whig members of the Illinois General Assembly held this caucus to organize for the upcoming presidential election of 1840.
3Veiled condemnation of the Independent Sub-Treasury System and its sub-treasurers, some of whom Congress found had embezzled substantial sums of money.
U.S. House. Report of the Committee of Investigation, Chosen by Ballot in the House of Representatives, January 17 and 19, 1839, on the Subject of the Defalcations of Samuel Swartwout and others, and the Correctness of the Returns of Collectors and Receivers of Public Money; Also the Report of the Minority of the Committee (Washington, DC: Thomas Allen, 1839), 191-92.
4In December 1839, the Whig National Convention nominated William Henry Harrison to run against Van Buren.
5If the committee drafted an address and had it published, it has not been found.

Proceedings of Whig Meeting in Hall of House of Representatives regarding Present Administration. [1839-02-27]. /documents/D200168. The Papers of Abraham Lincoln Digital Library.