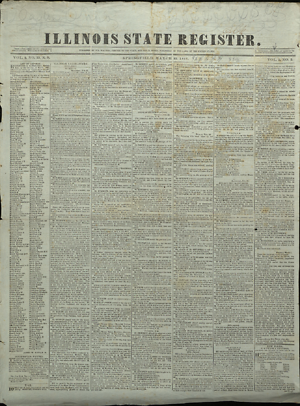 Summary of Legislative Debate on Bill to Tax Lawyers and Doctors, 27 February 18411
The bill for taxing Lawyers and Doctors, was taken up.
Mr LINCOLN moved to amend the Lawyers tax by striking out all that part of the bill taxing lawyers $15 in every county of the State in which they attend to any suit, (besides also $15 in their own county,) the amendment was carried.
Mr DOLLINS moved to amend by substituting 10 for $15, agreed to.
Mr BISSELL moved to reduce the Doctors tax from 10 to $5 agreed to.
Mr KITCHELL moved to tax all the members of the Legislature $5.
Mr LINCOLN suggested that there was a rule preventing them from voting in cases in which they were interested, and it appeared to him they were interested in this case, (a laugh)
Mr KITCHELL said the gentleman had put the boot on the wrong leg—that the interest was such as was in their favor and not when it went against them. The amendment was then rejected.
Mr WOOD offered to amend by taxing Senators $20 and representatives $10 when elected, for the use of the eounty[county], rejected.
The bill was then ordered to a 3rd reading.
1The bill discussed here was likely “A Bill to License Lawyers and Physicians,” of which there is no extant text; however, the legislature made multiple attempts during the Twelfth General Assembly to increase licensing fees on certain professions and occupations.
Illinois House Journal. 1840. 12th G. A., 553-54, 558; Resolution regarding Increasing the Public Revenue by a Tax; A Bill in relation to the Recording of Deeds, and for other Purposes; Amendment to “A Bill in relation to the Recording of Deeds for Other Purposes"; A Bill Requiring Pedlars to Procure License; A Bill to License Merchants, Auctioneers, Money Brokers, and Others; An Act to Regulate Foreign Insurance Company Agencies Established in the State of Illinois; An Act in relation to Pedlars.

Summary of Legislative Debate on Bill to Tax Lawyers and Doctors. [1841-02-27]. https://papersofabrahamlincoln.org/documents/D200273. The Papers of Abraham Lincoln Digital Library.