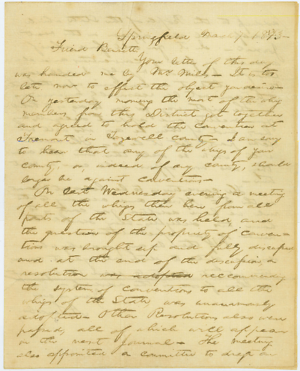 Abraham Lincoln to John Bennett, 7 March 18431
Springfield, March 7– 1843–Friend Bennett:
Your letter of this day was handed me by Mr Miles–2 It is too late now to effect the object you desire– On yesterday morning the most of the whig members from this District got together and agreed to hold the convention at Tremont in Tazewell county– I am sorry to hear that any of the whigs of your county, or, indeed of any county, should longer be against conventions–
On last Wednesday evening a meeting of all the whigs then here from all parts of the State was held, and the question of the propriety of conventions was brought up and fully discussed, and at the end of the discussion, a resolution was adopted reccommending the system of conventions to all the whigs of the State, was unanamously adopted– Other Resolutions also were passed, of which will appear in the next Journal– The meeting also appointed a committee to draft an
<Page 2>
address to the People of the State, which address will also appear in the next Journal–3 In it, you will find a brief argument in favour of conventions; and although I wrote it myself, I will say to you, that it is conclusive upon the point—that ^it^ can not be reasonably answered–4
The right way for you to do, is to hold your meeting and appoint delegates any how; and if there be any who will not take part, let it be so– The matter will work so well this time that even they who now oppose will come in next time–
The convention is to be held at Tremont on the 5th April, and according to the rule we have adopted your county is to have two delegates—being double the number of you[r] representatives–5
If there be any good whig who is disposed still to stick out against conventions, get ^him^ at least to read the argument in their favour in the address–
Yours as everA. Lincoln
<Page 3>
<Page 4>
Mr John BennettPetersburgIlls–
per favour of Mr Miles
1Abraham Lincoln authored the letter and the address on the back page, which was folded to create an envelope.
2Bennett’s March 7, 1843 letter to Lincoln has not been located.
3There is only one extant issue of the Sangamo Journal from March 1843, and it (March 30) does not include either the resolutions or Lincoln’s address. The address was, however, published in other Whig newspapers.
Sangamo Journal (Springfield, IL), 30 March 1843; Abraham Lincoln, Stephen T. Logan, and Albert T. Bledsoe to the People of the State of Illinois; Abraham Lincoln, Stephen T. Logan, and Albert T. Bledsoe to the People of the State of Illinois.
4The Quincy Whig published a report of the March 1 meeting on March 15.
5On March 16, the Whig State Central Committee postponed the convention to May 1 and changed the location to nearby Pekin.
Illinois Gazette (Lacon), 1 April 1843, 2:3; Proceedings of Whig Convention at Pekin, Illinois regarding Candidates for Congress.