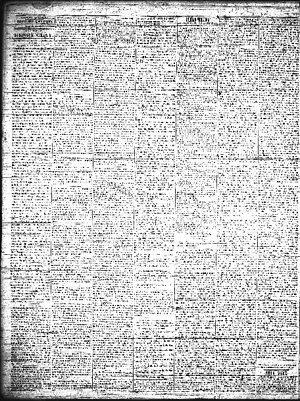 Related Document(s):
Abraham Lincoln, Stephen T. Logan, and Albert T. Bledsoe to the People of the State of Illinois

Report of Proceedings of Whig Meeting at Springfield regarding the Economy and Political Conventions, 1 March 1843 1
WHIG MEETING AT THE CAPITOL.
Henry Clay the Choice of the Whigs of Illinois.
Just previous to the adjournment of the Legislature, the Whigs of Springfield, and of the Legislature, held a public meeting in the Representatives’ Hall. Hon. Geo. Smith, of the Senate presided, assisted by G. W. Smith of the House, and G. W. Harrison of the Senate,—and J. K. Dubois, and A. Jonas, of the House, Secretaries. The object of the meeting was stated by Mr. Lincoln, of Springfield. Messrs. Lincoln, Browning, Henderson, Hanson and Baker, addressed the meeting. A series of resolutions were adopted, which follow. The address drawn up by A. Lincoln, S. T. Logan and A. T. Bledsoe, will appear in the next Whig.2
Resolved, That a Tariff of duties on imported goods, producing sufficient Revenue, for the payment of the necessary expenditures of the National Government, and so adjusted as to protect American Industry, is indispensably necessary to the prosperity of the American people.
Resolved, That we are opposed to Direct Taxation for the support of the National Government.
Resolved, That a National Bank, properly restricted, is highly necessary and proper to the establishment and maintainance of a sound currency; and for the cheap and safe collection, keeping, and disbursing the public revenue.
Resolved, That the distribution of the proceeds of the sales of Public Lands, upon the principles of Clay’s bill, accords with the best interests of the Nation, and particularly with those of the State of Illinois.3
Resolved, That we recommend to the whigs of each Congressional District of the State, to nominate and support, at the approaching election, a candidate of their own principles, regardless of the chances of success.
Resolved, That we recommend to the whigs of all portions of this State to adopt, and rigidly adhere to, the Convention System of nominating candidates.
Resolved, That we recommend to the whigs of each Congressional District to hold a District Convention on or before the first Monday of May next, to be composed of a number of delegates from each county equal to double the number of its Representatives in the General Assembly, provided each county shall have at least one delegate. Said delegates to be chosen by primary meetings of the whigs, at such times and places as they in their respective counties may see fit.—Said District Conventions, each, to nominate one candidate for Congress, and one delegate to a National Convention, for the purpose of nominating candidates for President and Vice President of the United States. The seven delegates so nominated to a National Convention, to have power to add two delegates to their own number, and to fill all vacancies.
Resolved, That A. T. Bledsoe, S. T. Logan, and A. Lincoln, be appointed a committee to prepare an address to the People of the State.
Resolved, That N. W. Edwards, A. G. Henry, James H. Matheny, John C. Doremus, and James C. Conkling, be appointed a Whig Central State Committee, with authority to fill any vacancy that may occur in the committee.
Mr. JONAS then offered the following which was received after rapturous applause and unanimously adopted:
Resolved, That HENRY CLAY, of Kentucky, has the entire confidence of the people of Illinois—that as a candidate for the Presidency in 1844, he would be our choice in preference to any other distinguished Statesman of the Whig party—but acting as we do, from principle and not for men, we pledge ourselves to rally to the support of the nominee of the National Convention, hoping that the selection will fall on “Harry of the West,” the first and dearest hope of a suffering country.
The following resolution was unanimously adopted–
Resolved, That the proceedings of this meeting be signed by the President, Vice Presidents and Secretaries, and published in all the Whig papers of the State.
1The meeting was held in the House of Representatives’ hall in the statehouse in Springfield on March 1, 1843. Lincoln confirmed the date in a letter to John Bennett on March 7, 1843.
Abraham Lincoln to Richard S. Thomas.
2The address by Lincoln, Logan, and Bledsoe was published in the Galena, Illinois North-Western Gazette on March 17 and in the Quincy Whig on March 22.
3In 1832, Henry Clay first proposed in Congress a bill to distribute among the states (especially the western states, including Illinois) the revenue from the sale of federally-owned lands. Distribution of the revenues from public lands became and remained an important part of the Whig platform. Distribution was finally passed as part of “An Act to Regulate the Deposites of Public Money,” in June 1836. A compromise measure generally referred to as the Deposit Act or the Distribution Act, it ordered the distribution to the states in order of their population all money in the treasury on January 1, 1837, in excess of $5 million; but distribution was contingent upon maintaining a tariff below 20 percent. In 1841, the tariff reached 20 percent and Clay’s distribution measure was automatically suspended.
Theodore Calvin Pease, The Frontier State, 1818-1848, vol. 2 of Sesquicentennial History of Illinois (Springfield: Illinois Centennial Commission, 1918), 185-88; Robert V. Remini, Andrew Jackson and the Bank War (New York: W. W. Norton, 1967), 170-71; Robert V. Remini, Henry Clay: Statesman for the Union (New York: W. W. Norton, 1991), 487-88; “An Act to Regulate the Deposites of Public Money,” 23 June 1836, Statutes at Large of the United States 5 (1856):55; Michael F. Holt, The Rise and Fall of the American Whig Party (New York: Oxford University Press, 1999), 130-31, 135-36.

Report of Proceedings of Whig Meeting at Springfield regarding the Economy and Political Conventions. [1843-03-01]. https://papersofabrahamlincoln.org/documents/D200323. The Papers of Abraham Lincoln Digital Library.