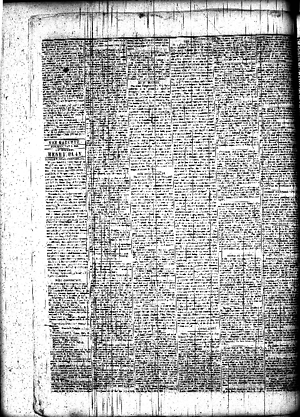 Proceedings of Whig Convention at Pekin, Illinois regarding Candidates for Congress, 1 May 1843
WHIG CONVENTION.
At a meeting of the delegates, representing the counties composing the seventh Congressional District of Illinois, held in Pekin on the first Monday of May inst., the following persons appeared as delegates from their respective counties, to wit:
Sangamon—A. Lincoln, N. W. Edwards, A. T. Bledsoe, S. T. Jones,1 Benj. A. Watson, Walker Davis, James H. Maxy, and James H. Matheny.
Morgan—Ranson Vanwinkle Jr., E. T. Miller, Francis Arnze, James Berdan, Cornelius Hook, William Brown, James Harkness and J. D. Rawlings.
Scott—William Gillham, Samuel R. Simms, James M. Ruggles, and E. B. Kirby.
Cass—Harvy O’Neil, and Edward R. Saunders.
Menard—Francis F. Reignier, and Geo. U. Miles.
Tazewell—Josiah L. James, Philo H. Thompson, Catsby Gill and John Durham.
Logan—Peter G. Cowardin.
Putnam—William Everett.2
Woodford—William R. Bullock.
Marshall—Robert Boal.
Mason—Francis Low.
The convention was organized by the appointment of Josiah L. James Esq.[Esquire] President, and E. B. Kirby Secretary.
On motion of Mr. Edwards,
Resolved, That the convention now proceed to the choice of a candidate for Congress.
Mr. Lincoln stated that he was requested to withdraw the name of Mr. Baker from before the convention; after which the convention proceeded to ballot, when it was ascertained that there was a unanimous vote for GEN. JOHN J. HARDIN of Morgan county.
E. D. BAKER Esq. was unanimously appointed the Delegate from this District to the National Convention, and FRANCIS ARNZE his substitute. It was voted that in case neither of them were able to attend that they be empowered with authority to appoint a substitute.
On motion of Mr. Durham, it was unanimously
Resolved, That our Delegate to the National Convention be instructed to vote for HENRY CLAY for President.
The following preamble and resolutions were introduced by Dr. Robert Boal, and passed by ayes 18—nays 15, to wit:
The delegates now convened, anxious to avoid any possible mischief which may originate amongst Whig friends by adopting, as a precedent, the system of instructing the delegates to Congressional Conventions to vote for particular men—and believing, this practice, if permamently adopted, will induce aspirants for office to press their claims, (personally, or through their friends) at local meetings in such a manner as greatly to embarrass the action of such conventions, and to distract the Whig party, and believing further that a convention, instead of being an electoral college to count votes, and making proclamation of the name receiving the highest number, should be a deliberative assembly, which after full consultation amongst its members, should proceed to select that man (from all the men of the District) the most likely to harmonize the whole party, and render the most efficient service to the country.
Therefore, to avoid all collision betwixt political friends, and to secure harmony.
Resolved, That for the future, we advise our political friends to avoid efforts to procure public manifestations of local preference, as such manifestations will always embarrass the deliberations of a convention, before which every man should appear as his character and talents may entitle him.
Resolved, That for the future, we recommend to the Whigs of the 7th Congressional District, that primany assemblies, be held in the several precincts of each county to designate the individuals who shall compose the county convention to select delegates to the District convention; which delegates shall not be instructed to go for any particular man, but shall be left free to choose that man as the candidate, who shall upon full consultation, be esteemed the most likely to render useful service to the country and give satisfaction to the District.
Mr. Lincoln introduced the following resolution, which on motion of Mr. Ruggles was adopted, ayes, 18—nays, 14, to wit:
Resolved, That this convention, as individuals, recommend E. D. Baker as a suitable person to be voted for by the whigs of this district, for Representative to Congress, at the election in 1844, subject to the decision of a District Convention, should the whigs of the district think proper to hold one.
Mr. Brown introduced the following resolution, which was adopted, to wit:
Resolved, That the whigs of this district be requested to hold their next convention for the nomination of a candidate for Congress, at Tremont, in the county of Tazewell, on the first Monday of May next.
On motion of Mr. Durham it was
Resolved, That William H. Wilmot, B. F. James, John Durham, Alden Hull, and C. Gill, of Tazewell county, be appointed a district committee for the district, to call conventions when necessary, and to attend to such other matters as concern the whigs of the whole district.
On motion of Mr. Ruggles, the Chair appointed Messrs.[Messieurs] A. Lincoln, E. D. Baker, J. J. Hardin, Wm. Brown and A. T. Bledsoe, a committee to prepare and publish an Address to the Whigs of the Seventh Congressional District.3
It was Resolved, That the proceedings of the meeting be signed by the President and Secretary, and published in the several Whig papers of the district.
On motion, the convention adjourned.
J. L. JAMES, President.E. B. Kirby, Secretary.
1This individual is likely either Strother G. Jones or Stephen T. Logan.
2This may actually refer to Wilson Everett of Putnam County.
3This address could not be located in any newspapers of the area.

Proceedings of Whig Convention at Pekin, Illinois regarding Candidates for Congress. [1843-05-01]. /documents/D200330. The Papers of Abraham Lincoln Digital Library.