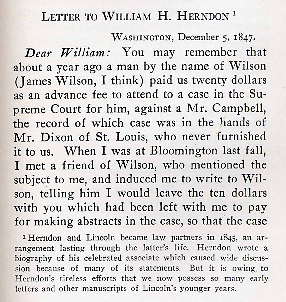 Abraham Lincoln to William H. Herndon, 5 December 18471
Washington, December 5, 1847.2Dear William:
You may remember that about a year ago a man by the name of Wilson (James Wilson3, I think) paid us twenty dollars as an advance fee to attend to a case in the Supreme Court for him, against a Mr. Campbell4, the record of which case was in the hands of Mr. Dixon5 of St. Louis, who never furnished it to us. When I was at Bloomington last fall, I met a friend of Wilson, who mentioned the subject to me, and induced me to write to Wilson, telling him I would leave the ten dollars with you which had been left with me to pay for making abstracts in the case, so that the case
<Page 2>
may go on this winter; but I came away, and forgot to do it. What I want now is to send you the money, to be used accordingly, if any one comes on to start the case, or to be retained by you if no one does.6
There is nothing of consequence new here. Congress is to organize to-morrow. Last night we held a Whig caucus for the House, and nominated Winthrop of Massachusetts for speaker, Sargent of Pennsylvania for sergeant-at-arms, Homer of New Jersey doorkeeper, and McCormick of District of Columbia postmaster. The Whig majority in the House is so small that, together with some little dissatisfaction, (it) leaves it doubtful whether we will elect them all.7
This paper is too thick to fold, which is the reason I send only a half-sheet.
Yours as ever,A. Lincoln.
1The only version of this text that has been located is a transcription in John Nicolay and John Hay’s Complete Works of Abraham Lincoln. The letter was presumably written and signed by Abraham Lincoln.
2On December 2, 1847, Lincoln arrived in Washington, DC to start his one term in Congress.
Michael Burlingame, Abraham Lincoln: A Life (Baltimore: The Johns Hopkins University Press, 2008), 1:257.
3James Wilson could not be identified.
4Mr. Campbell could not be identified.
5George C. Dixon could not be identified.
6Roy P. Basler, editor of The Collected Works of Abraham Lincoln, claimed, without attribution, that the case was dismissed on January 21, 1846, due to lack of prosecution.
Roy P. Basler, ed., The Collected Works of Abraham Lincoln (New Brunswick, NJ: Rutgers University Press, 1953), 1:417; “Lincoln wrote to Herndon about pending case,” Martha L. Benner and Cullom Davis et al., eds., The Law Practice of Abraham Lincoln: Complete Documentary Edition, 2d edition (Springfield: Illinois Historic Preservation Agency, 2009), http://www.lawpracticeofabrahamlincoln.org/Details.aspx?case=141715.
7The Whigs had a four-person majority in the House of Representatives in the 30th Congress. Robert C. Winthrop, Nathan K. Sargent, and Robert E. Horner were elected; William J. McCormick was defeated.
U.S. House Journal. 1848. 30th Cong., 1st sess., 9-10, 54, 56, 58; Roy P. Basler, ed., The Collected Works of Abraham Lincoln (New Brunswick, NJ: Rutgers University Press, 1953), 1:417.