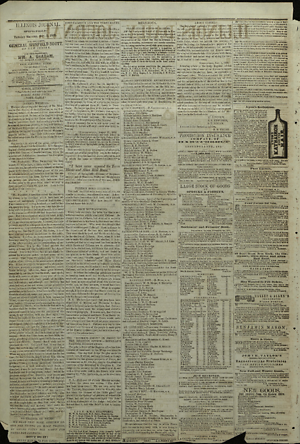 Abraham Lincoln, Benjamin S. Edwards, and Stephen T. Logan to the Editors of the Illinois Daily Journal, 1 November 18521
Springfield, Nov. 1, 1852.
A leading article in the Daily Register of this morning has induced some of our friends to request our opinion on the election laws, as applicable to challenged votes.2 We have examined the present Constitution of the State, the election law of 1849, and the unrepealed parts of the election law in the Revised code of 1848; and we are of opinion that any person taking the oath prescribed in the act of 1849, is entitled to vote; unless counter proof be made, satisfying a majority of the Judges that such oath is untrue, and that for the purpose of obtaining such counter proof, the proposed voter may be asked questions in the way of cross-examination, and other independent testimony may be received. We base our opinion as to receiving counter proof, upon the unrepealed Section Nineteen of the election Law in the Revised code.3
A. LINCOLN,B. S. EDWARDS,S. T. LOGAN.
[endorsement]
Treat, Samuel H.
I concur in the foregoing opinion,
S. H. TREAT.
1This letter is attributed in part to Abraham Lincoln, but the original in Lincoln’s hand is not extant. The Illinois State Register also published this letter in its November 2, 1852, issue.
Illinois State Register (Springfield), 2 November 1852, 2:2.
2Charles H. Lanphier, editor of the Illinois State Register, had charged that Whig election judges in Fancy Creek and other precincts in Sangamon County planned to reject the vote of foreign-born citizens in the federal and state election scheduled for November 2, unless they showed their naturalization papers. Lanphier had accused the Whigs of nativism, arguing that this rumored plan reflected the “deep-seated hostility of the Whig Party to the placing of men of foreign birth upon an equality with the native-born.” Lanphier had urged the naturalized citizens to refuse to present their naturalization papers.
Illinois State Register (Springfield), 1 November 1852, 2:1.
3Article six of the Illinois State Constitution of 1848 dealt with elections and the rights of suffrage. The framers did not include provisions for naturalized citizens. The election law of 1849, enacted by the Illinois General Assembly on February 12, provided for the method for voting by ballot and for the manner in which ballots were returned, collected, canvassed, and verified. Section ten prescribed the qualification for voters and the oath required of voters if election judges suspected a person was not a qualified voter. This law specifically repealed sections one, fifteen, eighteen, twenty-four, and thirty-nine, of chapter thirty-seven of the revised statutes, entitled “Elections,” enacted on March 3, 1845. It retained section nineteen of chapter thirty-seven, which required election judges to receive the vote of anyone taking the oath or affirmation, unless evidence convinced a majority of the judges in a precinct that the oath or affirmation was false; then the judges could reject the vote, and charge the perpetrator with perjury. Judges could also reject the votes of those who refused to take the oath.
Section eighteen of the revised statutes gave the right of suffrage to all white men twenty-one years or older having resided in Illinois six months preceding an election, regardless whether they had been naturalized or not. The General Assembly in the election law of 1849 repealed this section, and in section ten of the new law changed the qualification for suffrage to all white men twenty-one years of age or older having resided in Illinois one year preceding an election, or all white men over the age of twenty-one who resided in the state on April 1, 1848--the date the State Constitution of 1848 went into effect.
In the preamble to the letter, editors of the Illinois Daily Journal insisted, in light of the opinion, that having naturalization papers at the polls was “not indispensably necessary,” but advised “our friends among the adopted citizens to take their papers with them, as the shortest and easiest way of doing the thing up, in case of a controversy.”
Neither the Illinois Daily Journal nor the Illinois State Register reported voter repression or electoral irregularities on election day. The Illinois State Register noted that election day passed quietly in Springfield, except for a “few fights.”
A bastion for the Whig Party, Sangamon County gave Whig candidates majorities in the federal, state, and local elections. In the presidential election, Winfield Scott, candidate of the Whig Party, received 56.6% of the vote and Franklin Pierce, candidate of the Democratic Party, 42.8%. Pierce carried Illinois, however, with 51.87% of the vote to Scott’s 41.77 %. In the governor’s race, Whig candidate Edwin B. Webb received 56.4% of the vote to 43% for Democratic candidate Joel A. Matteson in the county, but Matteson won the statewide contest with 52.39% of the vote to Webb’s 41.76%. Richard Yates, the Whig incumbent in the Illinois Sixth Congressional District, won reelection with 51.09% of the vote, with Sangamon County giving him 60.6% of its vote to 39.4% for John Calhoun, his Democratic opponent. The entire slate of Whig candidates in Sangamon County elections received similar majorities.
Ill. Const. of 1848, art. VI, § 1-8; “An Act to Provide for the Mode of Voting by Ballot, and for the Manner of Returning, Canvassing and Certifying Votes,” 12 February 1849, Laws of Illinois (1849), 71-75; “Chapter XXXVII: Elections,” 3 March 1845, Revised Statutes of Illinois (1845), 213-24; Illinois Daily Journal (Springfield), 2 November 1852, 2:4; Illinois State Register (Springfield), 1 November 1852, 2:3; 4 November 1852, 2:1; Howard W. Allen and Vincent A. Lacey, eds., Illinois Elections, 1818-1990 (Carbondale and Edwardsville: Southern Illinois University Press, 1992), 9, 129, 131, 133.