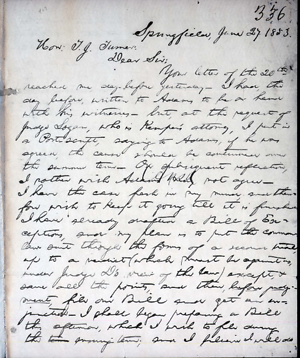 [docketing]
336
[docketing]
Turner, Thomas J.
Ansd[Answered]1
Abraham Lincoln to Thomas J. Turner, 27 June 18532
Springfield, June 27. 1853.Hon: T. J. Tuner:Dear Sir:
Your letter of the 20th reached me, day-before yesterday–3 I had, the day before, written to Adams to be on hand with his witnesses—4 but, at the request of Judge Logan, who is Kemper's attorney, I put in a Post-script, saying to Adams, if he was agreed, the cause should be continued over the summer term– On subsequent reflection, I rather wish Adams may not agree– I have the case fresh in my mind, and therefore wish to keep it going till it is finished I have already drafted a Bill of Exceptions5, and my plan is to put the common law suit through the form of a second trial, up to a verdict (which must be against us, under Judge D's view of the law) except, & save all the points, and then, before judgment, file our Bill and get an injunction– I shall began preparing a Bill this afternoon, which I wish to file during the term ensuing term; and I believe I will do
<Page 2>
this, even should the ejectment suit be continued— and in order to this, Mr Adams must come down to swear to the Bill– In no event can we be ready for proof in the chancery suit at this term, so that we will need no other witness than the one that was here last summer– I wrote Mr Adams about a Register's certificate & if he can find one or two missing tax receipts, let him bring them– I should be glad to see you & shake you by the hand; but as there is no contested jury question, I scarcely think you need be at the trouble & expense of coming– All the law questions which can arise at this term, the Judge has already decided–6
Very truly Yours.A. Lincoln
<Page 3>
<Page 4>
SPRINGFIELD Ill.[Illinois]
JUN[June] 28
PAID
3
Hon: T. J. TurnerFreeportIllinois–
1Thomas J. Turner wrote “Ansd” over the text of the letter about halfway down the page, as shown in the sheet in the first image.
2Abraham Lincoln wrote and signed this letter, including the address on the last sheet, which was folded to create an envelope.
3Turner’s June 20, 1853 letter to Lincoln has not been located.
4Lincoln wrote Adam Adams a letter on June 23, 1853, providing him with instructions related to a lawsuit involving Adams, John H. Kemper, and John Bovey.
5In American law, a bill of exceptions is a formal, written list of objections to a trial judge’s instructions, decisions, or rulings. The trial judge signs and seals the bill and places the objections upon the court’s official record.
“Bill of Exceptions,” Reference, Glossary, Martha L. Benner and Cullom Davis et al., eds., The Law Practice of Abraham Lincoln: Complete Documentary Edition, 2d edition (Springfield: Illinois Historic Preservation Agency, 2009), http://www.lawpracticeofabrahamlincoln.org/Reference.aspx?ref=Reference%20html%20files/Glossary.html; Henry Campbell Black, A Dictionary of Law (St. Paul, MN: West, 1891), 135.
6In the case Lincoln is discussing, Kemper v. Adams & Bovey, Kemper recovered a judgment against William F. Bradshaw, and the U.S. marshal sold Bradshaw's land in Ogle County, Illinois, to satisfy the judgment. Bradshaw conveyed the land to Adams and Bovey. Adams and Bovey had possession of the land that Kemper claimed to own by virtue of the judgment. Kemper sued Adams and Bovey in an action of ejectment in the U.S. Circuit Court, District of Illinois, to remove them from the property. Adams and Bovey retained Lincoln, Turner, and Solon Cumins; Kemper retained Stephen T. Logan. Lincoln and his fellow attorneys for the defense argued that the time during which Kemper could sue had expired. The Circuit Court found for Kemper. By virtue of an act promulgated in March 1839, the losing party in an ejectment case was entitled to one new trial simply by paying the court costs, and Adams and Bovey paid the costs and motioned for a new trial. The court granted the motion, and the jury found for Kemper. Adams and Bovey apparently sued Kemper for an injunction to stop the execution of the judgment, and in March 1858, the U.S. Circuit Court, Northern District of Illinois, ruled for Adams and Bovey. Lincoln received $100 for his legal services.
As indicated in another letter to Turner, Lincoln first became involved in the lawsuit in December 1849. He wrote multiple letters to Turner, Adams, Bovey, and Cumins regarding this case before its conclusion in 1858.
For the letters related to this case, see Kemper v. Adams & Bovey, Martha L. Benner and Cullom Davis et al., eds., The Law Practice of Abraham Lincoln: Complete Documentary Edition, http://www.lawpracticeofabrahamlincoln.org/Details.aspx?case=140935.