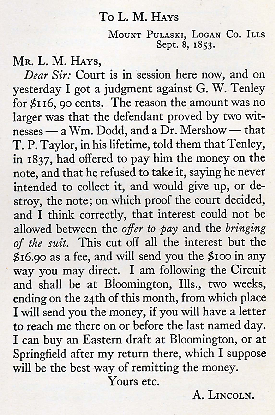 Abraham Lincoln to Lewis M. Hays, 8 September 18531
Mount Pulaski, Logan Co. Ills
Sept. 8, 1853.Mr. L. M. Hays,Dear Sir:
Court is in session here now, and on yesterday I got a judgment against G. W. Tenley for $116,90 cents.2 The reason the amount was no larger was that the defendant proved by two witnesses— a Wm. Dodd, and a Dr. Mershow— that T. P. Taylor, in his lifetime, told them that Tenley, in 1837, had offered to pay him the money on the note, and that he refused to take it, saying he never intended to collect it, and would give up, or destroy, the note; on which proof the court decided, and I think correctly, that interest could not be allowed between the offer to pay and the bringing of the suit. This cut off all the interest but the $16.90 as a fee, and will send you the $100 in any way you may direct. I am following the Circuit and shall be at Bloomington, Ills., two weeks, ending on the 24th of this month, from which place I will send you the money, if you will have a letter to reach me there on or before the last named day. I can buy an Eastern draft at Bloomington, or at Springfield after my return there, which I suppose will be the best way of remitting the money.
Yours etc.A. Lincoln.3
1This letter is attributed to Abraham Lincoln, but the original letter in Lincoln’s hand is not extant.
2Glibert A. Tracy, author and editor of Uncollected Letters of Abraham Lincoln, transcribed the name “G. W. Tenley,” but other letters Lincoln sent to Lewis M. Hays established the name should be “G. W. Turley.”
Lincoln left Springfield on September 5 to attend to legal business on the Eighth Judicial Circuit. He was in Mount Pulaski for the Logan County Circuit Court, which began its fall session on September 5.
Abraham Lincoln to Lewis M. Hays; Abraham Lincoln to Lewis M. Hays; The Lincoln Log: A Daily Chronology of the Life of Abraham Lincoln, 5 September 1853, http://www.thelincolnlog.org/Results.aspx?type=CalendarDay&day=1853-09-05; “An Act to Reduce the Limits of the Eighth Judicial Circuit, and to Fix the Times of Holding Courts Therein,” 3 February 1853, General Laws of Illinois (1853), 64.
3Lincoln references the judgment and legal fee in a lawsuit involving Turley and Hays. In July 1836, Turley gave Thomas P. Taylor a promissory note for $100, but failed to pay. After Taylor died in August 1842, Hays became the administrator of his estate. In April 1851, Hays retained Lincoln and sued Turley in the Logan County Circuit Court to collect the debt.
In October 1852, Lincoln wrote Hays that he had agreed to give Turley a few months to find evidence supporting his claim that Taylor had promised to destroy the note and forgive the debt. Lincoln justified the action by writing that he felt sorry for Turley, “poor and a cripple as he is.” Turley produced two witnesses, but on September 7, the court ruled for Hays, ordering Turley to pay the estate $116.90. Lincoln kept $16.90 as a fee for his legal services.
Lincoln enclosed a bank draft for $100 in a letter to Hays sent in November 1853.
Receipt, Document ID: 83371, Hays v. Turley, Martha L. Benner and Cullom Davis et al., eds., The Law Practice of Abraham Lincoln: Complete Documentary Edition, 2d edition (Springfield: Illinois Historic Preservation Agency, 2009), http://www.lawpracticeofabrahamlincoln.org/Details.aspx?case=136157; Abraham Lincoln to Lewis M. Hays; Thomas P. Taylor, Gravestone, Alexander Cemetery, Owen County, IN.