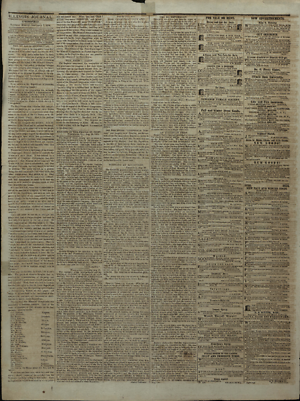 Summary of Speech at Winchester, Illinois, 26 August 18541
After the transaction of the regular business of the convention— adoption of resolutions, &c.[etc.],—the Hon. A. Lincoln of your city, who was present, was loudly called for to address the meeting. He responded to the call ably and eloquently, doing complete justice to his reputation as a clear, forcible and convincing public speaker. His subject was the one which is uppermost in the minds of the people— the Nebraska-Kansas bill; and the ingenious, logical, and at the same time fair and candid manner, in which he exhibited the great wrong and injustice of the repeal of the Missouri Compromise, and the extension of slavery into free territory, deserves and has received the warmest commendation of every friend of freedom who listened to him.– His was masterly effort— said to be equal to any upon the same subject in Congress,— was replete with unanswerable arguments, which must and will effectually tell at the coming election.2
1This summary is excerpted from a letter by pseudonymous author “Finality” to the editors of the Illinois Daily Journal, describing a meeting of the Scott County Whigs at Winchester to appoint delegates to the senatorial and representative convention. No other account of this speech has been located.
2This is Abraham Lincoln’s first speech on the Kansas-Nebraska Act. Passage of the Kansas-Nebraska Act and its effective repeal of the Missouri Compromise reawakened Lincoln’s passion for politics, and he threw himself into opposing the act, crisscrossing Illinois to deliver speeches against the legislation and to rebut Stephen A. Douglas’ views on popular sovereignty. Lincoln also spoke in support of Richard Yates and other anti-Nebraska candidates running for the U.S. House of Representatives in the 1854 congressional elections. Lincoln spent the days preceding and following this speech in Jacksonville with Yates, then traveled to Carrollton to deliver a campaign speech for Yates, returning to Springfield by August 30. See 1854 Federal Election.
David Herbert Donald, Lincoln (New York: Simon & Schuster, 1995), 167-73; The Lincoln Log: A Daily Chronology of the Life of Abraham Lincoln, 25 August 1854, http://www.thelincolnlog.org/Results.aspx?type=CalendarDay&day=1854-08-25; 26 August 1854, http://www.thelincolnlog.org/Results.aspx?type=CalendarDay&day=1854-08-26; 27 August 1854, http://www.thelincolnlog.org/Results.aspx?type=CalendarDay&day=1854-08-27; 28 August 1854, http://www.thelincolnlog.org/Results.aspx?type=CalendarDay&day=1854-08-28; 30 August 1854, http://www.thelincolnlog.org/Results.aspx?type=CalendarDay&day=1854-08-30; Autobiography of Abraham Lincoln Written for John L. Scripps.