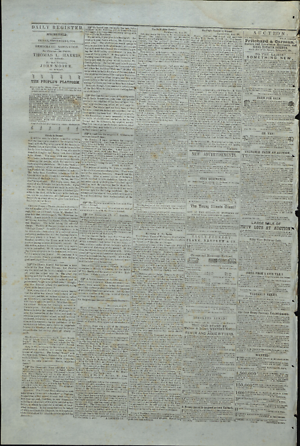 Summary of Speech at Carrollton, Illinois, 28 August 18541
Carrolton, Aug. 28.Messrs.[Messieurs] Editors:
Our friend and candidate the Hon. T. L. Harris, is with us. The democracy of old Greene have had a glorious time, notwithstanding the fatigne of a hard drive, and the thermometer at 96 in the shade, our candidate opened the political campaign with an assurance and self reliance in his ability to meet his opponent in a discussion of political questions that are now before the people, and well and truly did he acquit himself. I have neither time nor ability to give you the faintest idea of the masterly manner with which he handled his subject, and with what ease, grace and eloquence he proved beyond cavil the origin and intention of those who augmented the slavery agitation, and by whom it was done, when and where it was consummated, and for what purpose they now agitate the repeal of so much of the Kansas and Nebraska bill as relates to the Missourl compromise; all and every point of the subject matter under discussion was brought fairly before the people. The gentlemanly and dignified manner towards his opponent won even the respect and esteem of his bitter political enemies.
You will, undoubtedly, ask if the Hon. R. Yates was present. I am very sorry to have to answer you in the negative; and the abolitionists and whigs seemed very much chargrined, until they learned that their candidate was sick, and that Esq.[Esquire] Lincoln, his proxy, was on hand. True, his proxy was with us, and spoke two and a half hours; and, from the most prominent indications manifested by the abolitionists and whigs, I do candidly think they were very much disappointed, for he was for the restoration the Missouri compromise, which did not please near all the Clay whigs; and he was against the repeal of the fugitive slave law, which was very unsatisfactory to the abolitionists but take his speech all in all, I do believe it was as great a medley of matter as ever a man presented for the consideration of a congregation of free men.
I cannot give you a better or more definite idea how the people received it than by repeating what an old democrat observed, after listening very patiently to Lincoln for one hour. He said he would “go home, for that fellow wasn’t hurting any!”2
In the evening Mr. Harris replied to him, to the entire satisfaction of the democracy, and quite a number of very influential Clay whigs.3
VINDEX.
1The Democratic Illinois State Register published this summary of Abraham Lincoln’s speech as a letter to the editors from “Vindex.” The Daily Alton Telegraph published another summary of the speech.
2Passage of the Kansas-Nebraska Act and its effective repeal of the Missouri Compromise reawakened Lincoln’s passion for politics, and he threw himself into the congressional election campaign in the fall of 1854, crisscrossing the state to deliver speeches against the Kansas-Nebraska Act and in support of Richard Yates and anti-Nebraska candidates. Thomas L. Harris was challenging Yates, the incumbent, for the seat representing the Sixth Illinois Congressional District.
In a letter of August 28, 1854 to Harris printed in the Illinois Daily Journal, Yates wrote that Harris’ notification of his plan to begin the congressional campaign with a speech in Carrollton had arrived too late for Yates to attend. As Lincoln was at that moment with Yates in Jacksonville following a speech of his own in Winchester, Yates proposed to send Lincoln to speak in his place, with the intention that Lincoln would speak on the Kansas-Nebraska Act and not defend or attack either candidate. Lincoln had returned to Springfield by August 30.
David Herbert Donald, Lincoln (New York: Simon & Schuster, 1995), 167-73; Autobiography of Abraham Lincoln Written for John L. Scripps; Abraham Lincoln to Richard Yates; Illinois Daily Journal (Springfield), 1 September 1854, 2:2; Summary of Speech at Winchester, Illinois; The Lincoln Log: A Daily Chronology of the Life of Abraham Lincoln, 9 August 1854, http://www.thelincolnlog.org/Results.aspx?type=CalendarDay&day=1854-08-09; 28 August 1854, http://www.thelincolnlog.org/Results.aspx?type=CalendarDay&day=1854-08-28; 30 August 1854, http://www.thelincolnlog.org/Results.aspx?type=CalendarDay&day=1854-08-30.
3In the general election held in November 1854, Harris defeated Yates by 200 votes, garnering 50.5 percent of the vote to Yates’ 49.5 percent.
Howard W. Allen and Vincent A. Lacey, eds., Illinois Elections, 1818-1990 (Carbondale and Edwardsville: Southern Illinois University Press, 1992), 10.