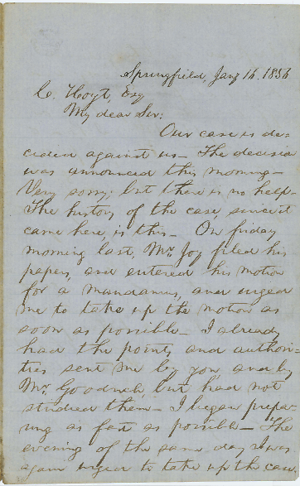 Abraham Lincoln to Charles Hoyt, 16 January 18561
Springfield, Jany 16. 1856C. Hoyt, Esq[Esquire]My dear Sir:
Our case is decided against us– The decision was announced this morning–2 Very sorry; but there is no help– The history of the case, since it came here, is this– On friday morning last, Mr Joy filed his papers, and entered his motion for a mandamus, and urged me to take up the motion as soon as possible– I already had the points and authorities sent me by you, and by Mr Goodrich,3 but had not studied them– I began preparing as fast as possible– The evening of the same day I was again urged to take up the case.
<Page 2>
I refused, one the ground that I was not ready; and on which plea I also got off over saturday– But on monday (the 14th) I had to go into it– We occupied the whole day, I using the larger part– I made every point, and used every authority sent me by yourself & by Mr Goodrich; and, in addition, all the points I could think of, and all the authorities I could find myself– I had 6. Barr– 70. and made all out of it that I could–4 When I closed the argument on my part, a large package was handed me, which proved to the Plat you sent me– The court received it of me; but it was
<Page 3>
not different from the Plat already in the record– I do not think I could ever have argued the case better than I did– I did nothing else, but prepare to argue, and argue, this case, from friday morning till monday evening–
Very sorry for the result; but I do not think it could have been prevented.5
Your friend as everA. Lincoln–
<Page 4>
[docketing]
01/18/1856
Hoyt, Charles
A Lincoln
Jany[January] 18/56[1856]6
1Abraham Lincoln wrote and signed this letter.
2Lincoln is discussing the case Chicago, Burlington, & Quincy RR v. Wilson. In late-November 1855, the Chicago, Burlington and Quincy Railroad filed a petition in the Kane County Circuit Court requesting that Judge Isaac G. Wilson, judge of Illinois’ Thirteenth Judicial Circuit, appoint commissioners to condemn and assess compensation for land in Aurora, Illinois that the railroad acquired in order to build workshops, depots, engine houses, and the like. Wilson denied the petition, ruling that the railroad’s charter did not give it the power to condemn land for such purposes after the road’s initial construction work was completed. In December 1855, the railroad applied to the Illinois Supreme Court for a writ of mandamus to compel Wilson to appoint the commissioners. A mandamus is a writ issued by a superior court compelling the person or inferior court to whom the writ is issued to perform some specified act. Writs of mandamus are only used in exceptional cases when all other means of enforcement have been unsuccessful.
James F. Joy and William B. Plato represented the railroad; Lincoln and Grant Goodrich represented Wilson. Charles Hoyt was one of the landowners who opposed and fought the condemnation. In December 1855, the Supreme Court ruled that Wilson had misinterpreted the railroad’s charter and awarded the mandamus.
Henry Campbell Black, A Dictionary of Law (St. Paul, MN: West, 1891), 748; “Mandamus,” Reference, Glossary, Martha L. Benner and Cullom Davis et al., eds., The Law Practice of Abraham Lincoln: Complete Documentary Edition, 2d edition (Springfield: Illinois Historic Preservation Agency, 2009), http://www.lawpracticeofabrahamlincoln.org/Reference.aspx?ref=Reference%20html%20files/Glossary.html; Plat Map, Document ID: 69069; Opinion, Document ID: 69070; Opinion, Document ID: 69072, Chicago, Burlington, & Quincy RR v. Wilson, Martha L. Benner and Cullom Davis et al., eds., The Law Practice of Abraham Lincoln: Complete Documentary Edition, http://www.lawpracticeofabrahamlincoln.org/Details.aspx?case=137860.
3Neither the documents that Hoyt sent to Lincoln, nor those that Goodrich sent to Lincoln, have been located.
4“6. Barr– 70.” was the legal shorthand for volume six, page seventy of Robert M. Barr’s, Pennsylvania State Reports, Containing Cases Adjudged in the Supreme Court, During Part of May Term, July Term, and Part of September Term, 1847. Lincoln references the case Railroad v. Berks County. In this case, the Pennsylvania Supreme Court ruled that because water stations and depots were necessary and indispensable to the construction and preparation of railroads they were exempt from taxation, while warehouses, coal lots and chutes, machine shops, wood yards, and the like were taxable because they were indispensable only to the railroad’s ability to generate profit.
Although Lincoln does not name the other “authorities” he used in his arguments, he almost certainly also utilized the railroad’s charter, substantive legislative updates to the charter, and the general railroad incorporation law. Enacted in 1849, the general railroad incorporation law governed the operation of railroads, including issues of right of way. Legislation in both 1852 and 1854 amended the charter of the railroad, changing its name and allowing it to branch outward from Aurora in Kane County, Illinois.
Railroad v. Berks County 6 Pa. (Barr) (1847), 70-75; The American Law Journal (Philadelphia: Thomas Cowperthwait and T. B. Peterson, 1849), 8:181; Century Edition of the American Digest: A Complete Digest of All Reported American Cases from the Earliest Times to 1896 (St. Paul: West, 1904), 45:491-92; “An Act Granting a Charter to the Aurora Branch Railroad Company,” 12 February 1849, Private Laws of Illinois (1849), 96-99; “An Act to Provide for a General System of Railroad Incorporations,” 5 November 1849, Laws of Illinois (1849), 18-33; “An Act to Amend the Charter of the Aurora Branch Railroad Company,” 22 June 1852, Laws of Illinois (1852), 170-71; “An Act to Amend the Charter of the Chicago and Aurora Railroad Company,” 28 February 1854, Laws of Illinois (1854), 143.
5Lincoln informed Hoyt that Justice John D. Caton had possession of the plat that Hoyt sent to the Illinois Supreme Court for use in this case. In February 1856, Hoyt wrote Caton, requesting that he return the plat.
Letter, Document ID: 91585, Chicago, Burlington, & Quincy RR v. Wilson, Martha L. Benner and Cullom Davis et al., eds., The Law Practice of Abraham Lincoln: Complete Documentary Edition, http://www.lawpracticeofabrahamlincoln.org/Details.aspx?case=137860.
6Hoyt wrote this docketing.