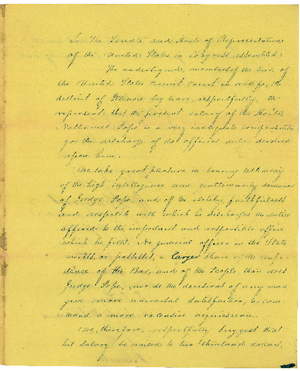 Petition of Orville H. Browning and Others to the Senate and House of Representatives of the United States, 23 December 18391
To The Senate and House of Representatives of the United States, in Congress assembled.
The undersigned, members of the bar, of the United States circuit court in and for the district of Illinois, beg leave, respectfully, to represent, that the present salary of the Hon’ble[Honorable] Nathaniel Pope is a very inadequate compensation for the discharge of the official duties devolved upon him.
We take great pleasure in bearing testimony of the high intelligence, and gentlemanly demeanor of Judge Pope, and of the ability, faithfulness and despatch with which he discharges the duties affixed to the important and responsible office which he fills. No judicial officer in the State merits, or possesses, a larger share of the confidence of the Bar, and of the People, than does Judge Pope; nor do the decisions of any man give more universal satisfaction, or command a more extensive acquiescence.
We, therefore, respectfully suggest that his salary be raised to two thousand dollars,
<Page 2>
believing that to be the least sum that would compensate him for his labour, his integrity and his ability.
Springfield, Illinois–
December 23rd 1839O. H. BrowningJohn J HardinE. B. WebbNinian W. EdwardsJ. Young Scammon.S N LittleWm J. GatewoodW A RichardsonJ. ButterfieldO B FicklinAndrew JohnstonJoseph GillespieSam D MarshallS T. LoganArchibald WilliamsA P. FieldLevi DavisA. Lincoln
<Page 3>
<Page 4>
[docketing]
26th Cong
1. Sess[Session]
Memorial of a number of members of the Bar in the State of Illinois, praying that the salary of the District Judge of that District may be increased.
[docketing]
01/06/1840
1840 Jan[January] 6. Referred to the Com:[Committee] on the Judiciary
[docketing]
Mr Robinson2
1Abraham Lincoln signed his name to this petition.
This petition was enclosed in a December 24, 1839 letter from Richard B. Servant to John Pope, Nathaniel Pope’s brother and U.S. representative from from Kentucky, asking him “to hand to your brother” the petition “immediately on his arrival,” presumbly in Washington, DC. Roy P. Basler misidentified Servant as “R. D. Servant.”
Roy P. Basler, ed., The Collected Works of Abraham Lincoln (Westport, CT: Greenwood, 1974), 10:4; R. B. Servant to John Pope, 24 December 1839, Abraham Lincoln Association Files, Lincoln Collection, Abraham Lincoln Presidential Library and Museum (Springfield, IL).
2As the clerk records, the U.S. Senate referred the petition to its Committee on the Judiciary, but apparently to no effect; in 1845, Pope’s salary was recorded as $1,500 annually.
Register of the Officers and Agents, Civil, Military, and Naval, in the Service of the United States, on the Thirtieth September, 1845 (Washington, DC: J. & G. S. Gideon, 1845), 223.

Petition of Orville H. Browning and Others to the Senate and House of Representatives of the United States, 23 December 1839. [1839-12-23]. /documents/D206849. The Papers of Abraham Lincoln Digital Library.