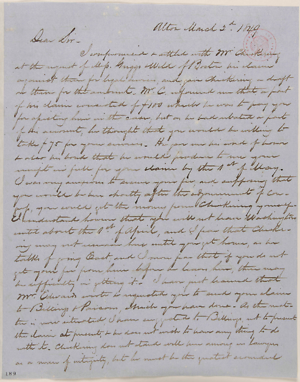 Levi Davis to Abraham Lincoln, 2 March 18491
Alton March 2d 1849Dear Sir–
I compromised & settled with Mr Chickering at the request of Mess.[Messieurs] Griggs & Weld of Boston his claim against them for legal services; and gave Chickering a draft on them for the amount–2 Mr C. informed me that a part of his claim consisted of [$?]100 which he was to pay you for assisting him in the case; but as he had rebated a part of his account, he thought that you would be willing to take [$?]75 for your services– He gave me his word of honor & also his bond that he would produce to me your receipt in full for your claim by the 1st of May– I was very anxious to secure your fee, and supposing that you would be here shortly after the adjournment of Congress, you could get the money from Chickering yourself– I understand however that you will not leave Washington until about the 1st of April, and I fear that Chickering may not remain here until you get home, as he talks of going East; and I more fear that if you do not get your fee from him before he leaves here, there may be difficulty in getting it.–3 I have just learned that Mr Edwards wrote & requested you to send your claim to Billings & Parsons, which you have done–4 As the matter is now situated, I have suggested to Billings, not to present the claim at present, & he does not wish to have any thing to do with it– Chickering does not stand well here among us lawyers, as a man of integrity, but he must be the greatest scoundrel
<Page 2>
out, if he do not pay you & will place me in a very awkward predicament if he do not– I will therefore suggest that if you do not intend to start home on the adjournment of Congress, that you will immediately on the receipt of this, write me, and authorize me to receive the amount of your claim from Chickering & if you are willing to take [$?]75 to say so–5 You can say in your write the letter as if I had written to you on some other business & mentioned this matter incidentally & say that you want me to get it & send it to Robert Irwin at Springfield, as you ^will^ send it there, before your return home & must have it–
You will understand how to do the thing up from these suggestions– I want Chickering to pay you before he goes East & he must do it, or I fear it will be lost– He will not go East certainly before the 1st of April I think–6 I feel much anxiety in this matter, because Nelson feels inclined to [?] me very much for not settling with Chickering in such a way as to retain your fee & I certainly would have done so, if I had had the money in my own hands.–7 I dislike very much however to deal with a man, ^so^ as to give him to understand that I believe he is a rascal & this was the case precisely with Chickering.–
I hope you will do all you can for our friend Cyrus Edwards in the way of getting him appointed Comr Genl[Commissioner of the General] Land Office–8
I remain
Your Friend & obt Sevt[obedient Servant]Levi DavisP. S. Perhaps you had better write to Chickering also at the same time you write to me.–9L. D.
1Levi Davis wrote and signed the letter.
2From 1845 to 1848, Lincoln & Herndon represented Boston financiers Griggs & Weld in legal cases against Hezekiah H. Gear in the Illinois Supreme Court and in federal court. John W. Chickering represented Griggs & Weld in the circuit court cases that initiated the appeals, and he served alongside Lincoln & Herndon representing Griggs & Weld at the Illinois Supreme Court and federal court levels.
Griggs & Weld v. Gear, Martha L. Benner and Cullom Davis et al., eds., The Law Practice of Abraham Lincoln: Complete Documentary Edition, 2d edition (Springfield: Illinois Historic Preservation Agency, 2009), http://lawpracticeofabrahamlincoln.org/Details.aspx?case=139743, http://lawpracticeofabrahamlincoln.org/Details.aspx?case=139745.
3Congress adjourned on March 3, 1849. Abraham Lincoln stayed in Washington, DC until March 20, arguing a legal case in the U.S. Supreme Court and attending to patronage appointments in the new Whig presidential administration. He left Washington on March 20 and returned to Springfield on March 31.
U.S. House Journal. 1849. 30th Cong., 2nd sess., 672-73; Illinois Daily Journal (Springfield), 2 April 1849, 2:2; Lewis for use of Longworth v. Lewis, Martha L. Benner and Cullom Davis et al., eds., The Law Practice of Abraham Lincoln: Complete Documentary Edition, 2d edition, http://lawpracticeofabrahamlincoln.org/Details.aspx?case=137763; The Lincoln Log: A Daily Chronology of the Life of Abraham Lincoln, 20 March 1849, http://www.thelincolnlog.org/Results.aspx?type=CalendarDay&day=1849-03-20.
4The identity of “Edwards” has not been established, and no contemporary letter from an Edwards to Lincoln has been located. Billings & Parsons likely refers to Henry W. Billings and Lewis B. Parsons, legal partners in Alton, Illinois.
History of Madison County, Illinois (Edwardsville, IL: W. R. Brink, 1882), 186-87.
5No response from Lincoln to Levi Davis has been located.
6By May 1849, Chickering still had not settled his debt to Lincoln.
Griggs & Weld v. Gear, Document 68605, Martha L. Benner and Cullom Davis et al., eds., The Law Practice of Abraham Lincoln: Complete Documentary Edition, 2d edition, http://lawpracticeofabrahamlincoln.org/Details.aspx?case=139743; John W. Chickering to Abraham Lincoln.
7“Nelson” has not been identified.
8Lincoln initially backed Cyrus Edwards’ candidacy for the lucrative position, before becoming a candidate himself. Ultimately, Justin Butterfield received the job. See the General Land Office Affair.
9No reply from Lincoln to either Chickering or Davis has been located.