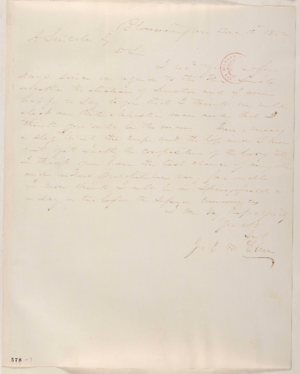 John E. McClun to Abraham Lincoln, 10 December 18541
Bloomington Dec 10th 1854A Lincoln Esq[Esquire]Dr[Dear] Sir
I recd[received] yours a few days since in regard to the US Senate or rather the election of Senator and I am happy to say to you that I think we will elect an Anti Nebraska man and that I think you will be the man. There is many a slip twixt the cup and the lip and I know not yet exactly the compilation of the body but I think you have the best chance of any other and indeed probabilities very favorable2 I now think I will be in Springfield a a day or two before the Session commences3
I am Very Respectfully
Yr obt Servt[Your obedient Servant]J. E McClun
<Page 2>
[Envelope]
PAID
3
BLOOMINGTON Ills[Illinois]
DEC[December] 11Hon A LincolnSpringfieldIll
[docketing]
Abraham Lincoln
J. E. McClun4
[docketing]
Dec 10/54[1854]5
1John E. McClun wrote and signed this letter, including the address on the envelope.
2Abraham Lincoln’s letter to McClun has not been located, but was likely similar to others he wrote around that time requesting his allies’ help in canvassing their Illinois General Assembly members for support of his potential candidacy for a seat in the U.S. Senate. Passage of the Kansas-Nebraska Act and its effective repeal of the Missouri Compromise had reawakened Lincoln’s passion for politics, and he threw himself into the congressional election campaign in the fall of 1854, crisscrossing Illinois to deliver speeches against the Kansas-Nebraska Act and in support of anti-Nebraska candidates. He even allowed himself to become a candidate for the Illinois General Assembly (albeit reluctantly at first). As the election campaign reached its climax, Lincoln’s name began to circulate as a possible nominee for one of the state’s U.S. Senate seats.
Illinois voters sent an anti-Nebraska majority to the Illinois General Assembly, in which Lincoln also won a seat. However, a member of the Illinois General Assembly could not run for the U. S. Senate, so in late-November 1854, Lincoln declined to serve in order to run for the U.S. Senate. Democrat Jonathan McDaniel won Lincoln’s vacated seat in the Illinois House of Representatives in the special election held on December 23, 1854. McDaniel’s victory did not help Lincoln’s cause in the election for Senate, as McDaniel cast his vote initially for James Shields and later for Joel A. Matteson. Ultimately, Lincoln did not win election to the U.S. Senate; the Illinois General Assembly selected anti-Nebraska Democrat Lyman Trumbull instead. McClun cast his vote for Lincoln until the tenth and final ballot, when he switched to Trumbull. See 1854 Federal Election.
Abraham Lincoln to Charles Hoyt; Abraham Lincoln to J. Young Scammon; Abraham Lincoln to Jacob Harding; David Herbert Donald, Lincoln (New York: Touchstone, 1995), 167-73; Autobiography of Abraham Lincoln Written for John L. Scripps; Michael Burlingame, Abraham Lincoln: A Life (Baltimore: The Johns Hopkins University Press, 2008), 1:392, 401-2; William H. Randolph to Abraham Lincoln; Stephen Hansen and Paul Nygard, “Stephen A. Douglas, the Know-Nothings, and the Democratic Party in Illinois, 1854-1858,” Illinois Historical Journal 87 (Summer 1994), 114; John Clayton, comp., The Illinois Fact Book and Historical Almanac, 1673-1968 (Carbondale: Southern Illinois University Press, 1970), 220-21; Illinois Daily Journal (Springfield), 10 November 1854, 2:5; The Lincoln Log: A Daily Chronology of the Life of Abraham Lincoln, 23 December 1854, http://www.thelincolnlog.org/Results.aspx?type=CalendarDay&day=1854-12-23; Ill. Const. of 1848, art. III, § 7; Illinois Senate Journal. 1855. 19th G. A., 1st sess., 242-55.
3The Nineteenth Illinois General Assembly convened in Springfield on January 1, 1855.
Louis L. Emmerson, Blue Book of the State of Illinois 1923-1924 (Springfield: Illinois State Journal, 1923), 680.
4Lincoln wrote this docketing.
5An unknown person wrote this docketing.