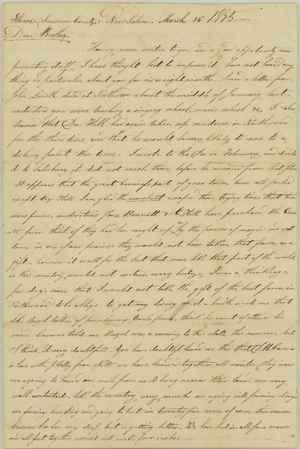 Charles James Fox Clarke to Hollis Joseph Clarke, 15 March 18351
Illinois. (Sangamon County,) New Salem, March 15 1835—Dear Brother—
Having never writen to you and a good opportunity now presenting itself I have thought best to improve it. have not heard any thing in particular about you for six or eight months. I recd[received] a letter from John Smith dated at Northwood about the middle of January last. understood you were teaching a singing school, music school &c.[etc] I also learned that Doc Hill had again taken up residence in Northwood for the third time and that he would be verry likely to come to a sticking point this time. I wrote to the Doc in February and directed it to Salisbury it did not reach there before he mooved from that place
It appears that the great business part of your town have all failed except Esqr Hill I am glad the marchant escaped those trying times that tried mens purses, understand Jona Bennett & E. Hill have purchased the Crockett farm think if they had ben caught up ^as^ by the power of magic and sat down in one of our prairies they would not have taken that farm as a gift— however it is all for the best that some like that part of the world as this country would not contain every body— I was a thinking a few day’s since that I would not take the gift of the best farm in Northwood to be oblige to get my living on it— Smith wrote me that S.C. Buzel talked of purchasing Uncles farm, think he must of altered his mind, Caverne told me Buzel was a comeing to this state this summer, but I think it very doubtfull. You have doubtless heard ere this that [D. B. Caverne?] is here with J. Colby from N. H. we have boarded together all winter, they now are agoing to board one mile from us it being nearer their land. are very well contented, like the country very much, are agoing into farming strong, are fenceing, breaking and going to put in twenty five acres of corn this season [Caverne?] has ben very deaf but is getting better, We have had in all four snows and all put together would not make four inches—
<Page 2>
Items— Two mormons preached on Indian Creek last week— Marsh went there to meeting not to hear the preaching but to see a girl and oilcloth painter by trade, distance 12 miles. one of our neighbours has a stock of two hundred head of cattle, fifty horses, four hundred hogs and lots of other things and cash to boot he can neither read or write dont know the alphabet— Marsh was absent last night, stoped about two miles from home you may gess his businessCaverne sends his respects— tell Danielson to have his tools in order for I want him to make me a pair of boots &c— I [respect in season?] I wish him wellhope he will live forever—
Respects to all that like them— May write to Mother by and by say in May— Can you believe I think of being [married?] this fall I don’t think it much doubtful
C. J. F. C.To H. Joseph Clarke Esqr
Single
Hollis J. Clarke. EsqrWest NorthwoodNew Hampshire
[endorsement]
03/17/[1835]
Abraham Lincoln
New Salem Ills
March 17.
252
1Acting as Postmaster, Abraham Lincoln wrote only the endorsement on page two.
2Abraham Lincoln served as Postmaster at New Salem from May 7, 1833 to May 30, 1836. Postage for distances over 400 miles cost $0.25. At this time, postage was paid by the recipient of the mail.
Harry E. Pratt, Personal Finances of Abraham Lincoln (Springfield, IL: Abraham Lincoln Association, 1943), 15.