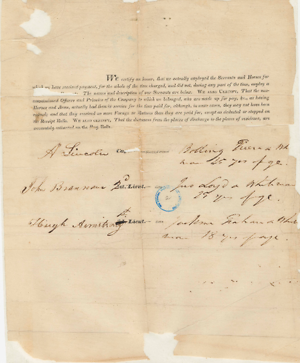 Certification of Abraham Lincoln, John Brannen, and Hugh Armstrong, July 18321
We certify on honor, that we actually employed the Servants and Horses for which we have received payment, for the whole of the time charged, and did not, during any part of the time, employ a . . . The names and description of our Servants are below. We also Certify, That the non-commissioned Officers and Privates of the Company to which we belonged, who are made up for pay, &c.[etc.], as having Horses and Arms, actually had them in service for the time paid for, although, in some cases, they may not have been valued; and that they received no more Forage or Rations than they are paid for, except as deducted or stopped on the Receipt Rolls. We also Certify, That the distances from the places of discharge to the places of residence, are accurately estimated on the Pay Rolls.
1This document is printed. Abraham Lincoln signed his own name only.
2At the outbreak of the Black Hawk War, Lincoln volunteered for the Illinois state militia. On April 21, 1832, Lincoln and other men from New Salem were mustered into a company in the 4th Regiment of Illinois Mounted Volunteers, and the members of the company elected Lincoln as their captain. When his month of service ended, Lincoln re-enlisted twice, for twenty and thirty days respectively, serving as a private both times. He was discharged finally on July 10, 1832.
Muster Roll of Abraham Lincoln’s Company of Mounted Volunteers; Muster Roll of Captain Elijah Iles’ Company of Mounted Volunteers; Muster Roll of Captain Jacob M. Early’s Company of Mounted Volunteers; Ellen M. Whitney, comp., The Black Hawk War, 1831-1832: Illinois Volunteers, vol. 35 of Collections of the Illinois State Historical Library (Springfield: Illinois State Historical Library, 1970), 1:176-78, 227-30, 544-46.
3"2d" written over a printed "1st".