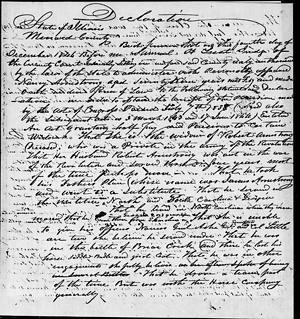 
Copy of Handwritten Document Signed, 4 page(s), RG 15, A1, Entry 2A: Records of the Bureau of Pensions and the Pension Service, Bureau of Pensions Correspondence and Pension Bounty-Land Case Files Relating to Military Service Performed Between 1775 and 1861, Revolutionary War Pension and Bounty Land Warrant Application Files, 1800-1900, NAB.