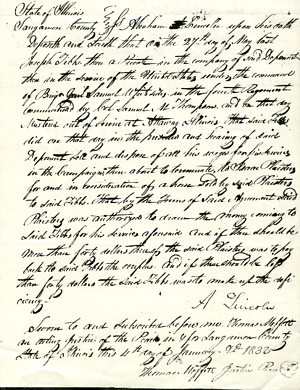 Affidavit of Abraham Lincoln regarding Joseph Tibbs, [4 January 1833]1
Abraham A Lincoln upon this oath Deposeth and Saith that on the 27th day of May last Joseph Tibbs, then a Private in the company of said Deponent then in the service of the United States under the command of Brigr[Brigadier] Genl Samuel Whitesides, in the fourth Regiment Commanded by Col.[Colonel]Samuel M. Thompson and on that day Mustered out of Service at Attaway Illinois. That said Tibbs did on that day in the presence and hearing of said Deponent sell and dispose of all his wages for his Services in the Campaign, then about to terminate, to Isaac Plaisters for and in consideration of a horse sold by said Plaisters to said Tibbs. That by the Terms of Said Agreement Said Plaisters was authorized to draw the money coming to Said Tibbs for his services aforesaid and if there should be more than forty dollars thereof the said Plaisters was to pay back to said Tibbs the overplus. And if there should be less than forty dollars the said Tibbs was to make up the deficiency—2
A Lincoln
[certification]
01/04/1833
Moffett, Thomas (Moffitt)
Sworn to and Subscribed before me, Thomas Moffett an acting Justice of the Peace, in & for Sangamon County State of Illinois this 4th day of January AD 1833
Thomas Moffett Justice Peace
seal
1Thomas Moffett wrote this document. Abraham Lincoln signed his own name only.
2At the outbreak of the Black Hawk War, Lincoln volunteered for the Illinois state militia. On April 21, 1832, Lincoln and other men from the New Salem area were mustered into a company in the 4th Regiment of Illinois Mounted Volunteers, and the members of the company elected Lincoln as their captain. When his month of service ended, Lincoln re-enlisted twice, for twenty and thirty days respectively, serving as a private both times. He was discharged finally on July 10, 1832.
Muster Roll of Abraham Lincoln’s Company of Mounted Volunteers; Muster Roll of Captain Elijah Iles’ Company of Mounted Volunteers; Muster Roll of Captain Jacob M. Early’s Company of Mounted Volunteers; Ellen M. Whitney, comp., The Black Hawk War, 1831-1832: Illinois Volunteers, vol. 35 of Collections of the Illinois State Historical Library (Springfield: Illinois State Historical Library, 1970), 1:176-78, 227-30, 544-46.