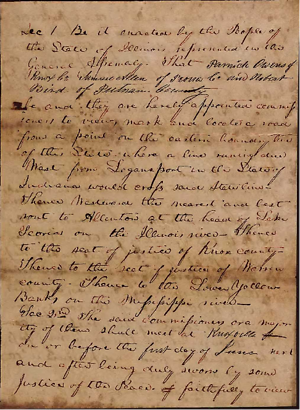 A Bill to Lay Out a State Road from the Wabash to the Yellow Banks of the Mississippi River, [12 January 1835]1
Sec[Section] 1 Be it enacted by the People of the State of Illinois represented in the General Assembly— ThatParnick Owens of Knox Co[,] Samuel Allen of Peoria Co and Robert Bird2 of Putnam County3be and they are hereby appointed commissioners to view, mark and locate a road from a point on the eastern boundry line of this State— where a line runing due West from Logansport in the State of Indiana would cross said State line— Thence Westward the nearest and best rout to Allenton at the head of Lake Peoria on the Illinois river— Thence to the seat of justice of Knox county— Thence to the seat of justice of Warren county— Thence to the Lower Yellow Banks on the Mississippi river—
Sec 2nd The said commissioners or a majority of them shall meet atKnoxville [...?]on or before thefirstday ofJune4next and after being duly sworn by some Justice of the Peace— of faithfully to view
<Page 2>
and locate said road without partiality favour or affection, shall immediately thereafter proceed to discharge the duties required of them by this act, placing in the prairy, through which the same shall pass stakes of a reasonable size of durable timber
Sec. 3. As soon as practicable, after said road is located, said commissioners or a majority of them shall make out a report accompanied by a map or plat of said road denoting the courses and distances from point to point— with such other remarks as they, or a majority of them may deem necessary and proper; and transmit the same to the Secretary of state— And they or a majority of them shall make a map or plat of so much of said road as lies within the respective counties, and transmit it to the clerk of the county commissioners court of the respective counties through which the same may pass which shall be filed and preserved in the office of said court—
Sec 4 When said road shall be located
<Page 3>
it shall be to all intents and purposes a State road, four poles wide, and shall be opened and kept in repair as other roads are in this State—5
Sec 5. The county commissioners court of each county through which the said road may pass are hereby authorized and required ^if they shall think proper6^ to allow to said commissioners one dollar and fifty cents per day for the time necessarily employed in locating the said road in each of their respective counties: Provided that nothing herein contained shall be so construed as to create any liability on the part of this State to pay said commissioners for their services, rendered under the authority of this act—
This act to be in force from and after its passage—
<Page 4>
[docketing]
A Bill for An act to lay out a State Road, from the Wabash to the Yellow Banks on the Mississippi
[docketing]
[01]/[13]/[1835]
2
[docketing]
[01]/[13]/[1835]
sel com Butler
Wyatt
Brown
[docketing]
[01]/[15]/[1835]
Prickett, David (Pricket)
to be Engrossed.
Clk. H. R.
1Lincoln wrote the entirety of this bill, aside from the blanks, which were filled in by someone else, and the insertions. These instances are indicated by carets and footnotes.
On January 1, 1835, John Hamlin presented to the House of Representatives a petition from citizens of Putnam and Peoria counties, asking for a state road. The House referred the petition to the Committee on Petitions. On January 12, John T. Stuart returned to the House from the Committee and introduced this bill, mostly in the handwriting of Abraham Lincoln. On January 13, the House referred it to a select committee. On January 15 the select committee reported back the bill with an amendment, which the House approved. The House passed the bill as amended on January 16. The Senate passed the bill on January 23. On January 26, the Council of Revision approved the bill and the act became law.
Illinois House Journal. 1835. 9th G. A., 1st sess., 194, 271, 288, 295, 308, 370, 380, 388, 391; Illinois Senate Journal. 1835. 9th G. A., 1st sess., 265, 276, 286, 317. 328, 334, 335.
2There were two Robert Birds living in Putnam County (now Marshall County) during this time period.
3The commissioners’ names were filled in by someone other than Lincoln.
4“Knoxville,” “first,” and “June” were filled in by someone other than Lincoln.
5State roads were those public roads established or designated by the General Assembly and usually crossed county lines. Only the General Assembly could establish, alter, or abandon state roads, until 1840 and 1841, when the General Assembly gave counties the authority to alter or to abandon state roads upon petition by a majority of voters in the area of the change.
An Act concerning Public Roads, sec. 9; An Act Authorizing Commissioners’ Courts to Alter, Change, and Relocate State Roads; An Act concerning Public Roads.
6This insertion was written by someone other than Lincoln.

A Bill to Lay Out a State Road from the Wabash to the Yellow Banks of the Mississippi River. [1835-01-12]. /documents/D200047. The Papers of Abraham Lincoln Digital Library.