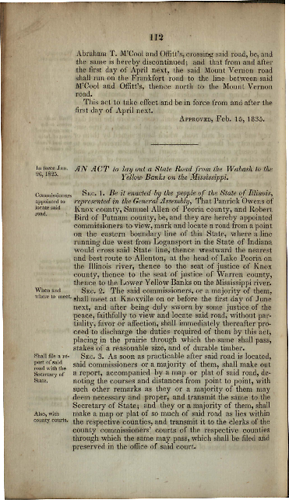 In force Jan.[January] 26, 1825.
AN ACT to lay out a State Road from the Wabash to the Yellow Banks on the Mississippi.
Commissioners appointed to locate said road.
Sec.[Section] 1. Be it enacted by the people of the State of Illinois, represented in the General Assembly, That Patrick Owens of Knox county, Samuel Allen of Peoria county, and Robert Bird of Putnam county, be, and they are hereby appointed commissioners to view, mark and locate a road from a point on the eastern boundary line of this State, where a line running due west from Logansport in the State of Indiana would cross said State line, thence westward the nearest and best route to Allenton, at the head of Lake Peoria on the Illinois river, thence to the seat of justice of Knox county, thence to the seat of justice of Warren county, thence to the Lower Yellow Banks on the Mississippi river.
When and where to meet.
Sec. 2. The said commissioners, or a majority of them, shall meet at Knoxville on or before the first day of June next, and after being duly sworn by some justice of the peace, faithfully to view and locate said road, without partiality, favor or affection, shall immediately thereafter proceed to discharge the duties required of them by this act, placing in the prairie through which the same shall pass, stakes of a reasonable size, and of durable timber.
Shall file a report of said road with the Secretary of State.
Also, with county courts.
Sec. 3. As soon as practicable after said road is located, said commissioners or a majority of them, shall make out a report, accompanied by a map or plat of said road, denoting the courses and distances from point to point, with such other remarks as they or a majority of them may deem necessary and proper, and transmit the same to the Secretary of State; and they or a majority of them, shall make a map or plat of so much of said road as lies within the respective counties, and transmit it to the clerks of the county commissioners’ courts of the respective counties through which the same may pass, which shall be filed and preserved in the office of said court.
<Page 2>
Road declared a state road.
Sec. 4. When said road shall be located, it shall be to all intents and purposes a State road, four poles wide, and shall be opened and kept in repair as other State roads are in this State.
Compensation.
Proviso.
Sec. 5. The county commissioners courts of each county through which the said road may pass, are hereby authorized, if they shall think proper, to allow said commissioners one dollar and fifty cents per day, for the time necessarily employed in locating the said road in each of their respective counties: Provided, That nothing herein contained, shall be so construed as to create any liability on the part of this State, to pay said commissioners for their services rendered under the authority of this act.
This act to be in force from and after its passage.
Approved, Jan. 26, 1835.

An Act to Lay out a State Road from the Wabash to the Yellow Banks on the Mississippi. [1835-01-26]. /documents/D200047c. The Papers of Abraham Lincoln Digital Library.