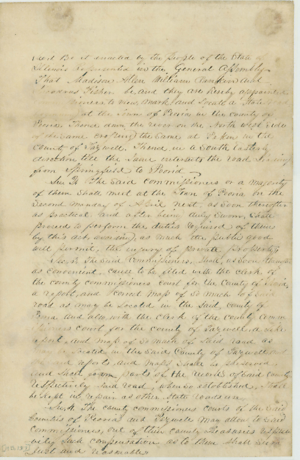 Sec[Section]. 1. Be it enacted by the people of the State of Illinois Represented in the General Assembly, That Madison Allen[,] William Rankin[,] and Theodorus Fisher, be, and they are hereby appointed commissioners, to view, mark, and locate a State road, beginning at the Town of Peoria in the county of Peoria, Thence down the river on the North west side of the same crossing the same at Pekin in the county of Tazwell. Thence in a south Easterly direction till the same intersects the road leading from Springfield to Peoria.
Sec. 2. The said commissioners or a majority of them shall meet at the Town of Peoria on the second Monday of April next, as soon thereafter as practical, and after being duly sworn, shall proceed to perform the duties required of them by this act, avoiding, as much the public good will permit, the injury of private property.
Sec. 3. The said commissioners, shall, as soon thereafter as convenient, cause to be filed with the clerk of the county commissioners court for the county of Peoria, a report, and correct map of so much of said road as may be located in the said county of Peoria and also, with the clerk of the county commissioners court for the county of Tazwell, a like report, and map of so much of said road as may be located in the said County of Tazwell, and the said reports, and maps shall be preserved, and shall form parts of the record’s of said counties respectively said road, when so established, shall be kept in repair as other state roads are.
Sec. 4. The county commissioners courts of the said Counties of Peoria and Tazwell may allow to said commissioners, out of their county Treasuries respectively such compensation as to them shall seem just and reasonable.
<Page 2>
Sec. 5. That the county commissioners court of the county of Tazewell be and they are hereby authorized, and directed to receive and confirm the report of Thomas Griffith[,] Benjamin Briggs[,] and Joshua Brown or a majority of them commissioners appointed by an act, entitled “an act to change a state Road therein named, approved February 6th 1835, to review and relocate any part of the State Road leading from Pekin to Danvill lying between the Town of Pekin and Mackinaw, provided said report has been or shall be presented to said Court on or before the first Monday of June next.
Sec. 6.
The Road when reported as aforesaid shall be considerd a state road in every respect as though said report had been made within the time prescribed by the act aforesaid.”
[certification]
01/11/1836
Prickett, David (Pricket)
Passed H. R. Jan. 11th 1836
D. Prickett Clk[Clerk]. H. R.
<Page 3>
<Page 4>
[docketing]
H. R.
A Bill Entitled “an act to Locate a State Road from Peoria to Pekin, Thence to intersect the road leading from Peoria to Springfield and for other purposes.
[docketing]
[01]/[09]/[1836]
Engrossed
[docketing]
[01]/[18]/[1836]
Prickett, David (Pricket)
to be Enrolled
Clk. H. R.

A Bill to Locate a State Road from Peoria to Pekin, thence to Intersect the Road Leading from Peoria to Springfield and for Other Purposes. [1836-01-11]. https://papersofabrahamlincoln.org/documents/D200072b. The Papers of Abraham Lincoln Digital Library.