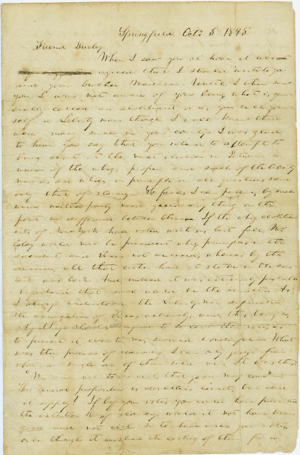 Abraham Lincoln to Williamson Durley, 3 October 18451
Springfield, Octr 3. 1845Friend Durley:
When I saw you at home, it was, at my suggestion, agreed that I should write to you and your brother Madison–2 Until I then saw you, I was not aware of your being what is generally called an abolitionist, or as you call yourself, a Liberty man, though I well knew there were many such in your county– I was glad to hear you say that you intend to attempt to bring about, at the next election in Putnam, a union of the whigs proper, and such of the liberty men, as are whigs in principle on all questions save only that of slavery– So far as I can perceive, by such union, neither party need yield any thing, on the point in difference between them– If the whig abolitionists of New-York had voted with us last fall, Mr Clay would now be president, whig principles in the ascendent, and Texas not annexed; whereas by the division, all that either had at stake in the contest, was lost–3 And, indeed, it was extremely probable beforehand, that such would be the result– As I always understood, the Liberty-men deprecated the annexation of Texas extremely; and, this being so, why they should refuse to so cast their votes as to prevent it, ever to me, seemed wonderful– What was their process of reasoning, I can only judge from what a single one of them told me– It was this: "We are not to do evil that good may come"– This general proposition is doubtless correct; but did it apply? If by your votes you could have prevented the extension, &c.[etc.] of slavery, would it not have been good and not evil so to have used your votes, even though it involved the casting of them for a
<Page 2>
slaveholder? By the fruit the tree is to be known–4 An evil [trees?] tree can not bring forth good fruit– If the fruit of electing Mr Clay would have been to prevent the extension of slavery, could the act of electing have been evil?
But I will not argue farther– I perhaps ought to say that individually I never was much interested in the Texas question– I never could see much good to come of annexation; inasmuch, as they were already a free republican people on our own model; on the other hand, I never could very clearly see how the annexation would augment the evil of slavery– It always seemed to me that slaves would be taken there in about equal numbers, with or without annexation– And if more were taken because of annexation, still there would be just so many the fewer left, where they were taken from– It is possibly true, to some extent, that with annexation, some slaves may be sent to Texas and continued in slavery, that otherwise might have been liberated– To whatever extent this may be true, I think annexation an evil– I hold it to be a paramount duty of us in the free states, due to the Union of the states, and perhaps to liberty itself itself (paradox though it may seem) to let the slavery of the other states alone; while, on the other hand, I hold it to be equally clear, that we should never knowingly lend ourselves directly or indirectly, to prevent that slavery from dying a natural death—to find new places for it to live in, when it can no longer exist in the old– Of course I am not now considering what would be our duty, in cases of insurrections among the slaves– To recur to the Texas question, I understand the Liberty men to have viewed annexation as a much
<Page 3>
greater evil than I ever did; and I, would like to convince you if I could, that they could have prevented it, without violation of principle if they had chosen–
I intend this letter for you and Madison together; and if you and he, or either, shall think fit to drop me a line, I shall be pleased–
Yours with respectA Lincoln
[docketing]
PAID5
<Page 4>
SPRINGFIELD Ill.[Illinois]
OCT[October] 4
5
Mr Williamson DurleyHennepinIllinois
1Abraham Lincoln wrote and signed this letter. He also wrote the address on the last sheet, which was folded to make an envelope.
2Lincoln likely visited Hennepin and other towns in Marshall and Putnam counties on or around September 13, 1845, while attending the Woodford County Circuit Court at Tremont.
The Lincoln Log: A Daily Chronology of the Life of Abraham Lincoln, 13 September 1845, http://thelincolnlog.org/Results.aspx?type=CalendarDay&day=1845-09-13.
3In the presidential election of 1844, Clay lost New York by 5,106 votes, and that narrow loss cost him the election, giving James K. Polk the presidency. The Liberty Party polled 15,812 in New York; had Clay received only a third of those votes, he would have won. Some Whigs attributed Clay’s loss to the Liberty Party and the refusal of abolitionists to vote for Clay, though other Whigs blame Clay’s loss on his waffling on the annexation of Texas. Anti-annexation Whigs and abolitionist voters opposed the annexation of Texas due to the existence of slavery in the territory, on the grounds that its annexation would allow the extension of slavery and cause sectional controversy.
Michael F. Holt, The Rise and Fall of the American Whig Party: Jacksonian Politics and the Onset of the Civil War (New York: Oxford University Press, 1999), 168-69, 195-96, 197; Paul H. Bergeron, The Presidency of James K. Polk (Lawrence: University Press of Kansas, 1987), 19-20; John L. Moore, Jon P. Preimesberger, and David R. Tarr, eds., Congressional Quarterly’s Guide to U.S. Elections, 4th ed. (Washington, DC: CQ Press, 2001), 1:649.
4Luke 6:43-45.
5This text appears upside down and was stamped.