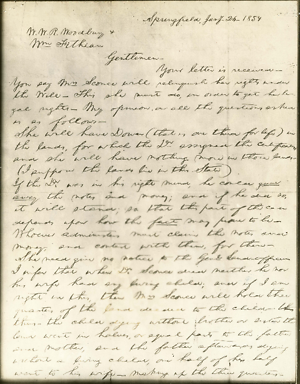 Abraham Lincoln to William W. R. Woodbury and William Fithian, 26 January 18541
Springfield, Jany 26– 1854 W. W. R. Woodbury & Wm Fithian Gentlemen–
Your letter is received– You say Mrs Sconce will relinquish her rights under the Will–2 This she must do, in order to get her legal rights– My opinion, on all the questions asked is as follows–
She will have Dower (that is one third for life) in the lands, for which the Dr assigned the certificates, and she will have nothing more in those lands–3 (I suppose the lands lie in this State)4
If the Dr was in his right mind, he could give away the notes and money; and if he did so, it will stand; so that this part of the case depends upon how the fact may prove to be– Whoever administers must claim the notes and money, and contest with them, for them–5 She need give no notice to the Genl Land-office– I infer that when Dr Sconce died neither he nor his wife had any living child; and if I am right in this, then Mrs Sconce will hold thee quarters of the land deeded to the child— [thus?] thus— the child dying without brother or sister the land went in halves, or equal parts to the father and mother, and the father afterwards dying without a living child, one half of his half went to his wife— making up the three quarters–
<Page 2>
Their having the deed to the child will do no harm–
Better mention this to W. H. Lamon, lest he should, unawares, commit me to the other side–
Yours &C,[etc.]A. Lincoln–
[docketing]
Abram[Abraham] Lincoln 18546
1Abraham Lincoln wrote and signed this letter.
2Under the provisions of James A. D. Sconce’s January 4, 1854 will, his executor was to sell a two-acre tract of land and use the proceeds to purchase a small house in Danville for Sconce’s widow Sarah Field Sconce. The executor was not to spend more than $1,500 on the residence, and any leftover funds were to be given to Sarah. Sarah was also to receive a tract of land in Tazewell County, James’s buggy and harness, a horse to be purchased by his executor, and all of his household furnishings. Three of James’s siblings were each gifted a tract of land in the will, with further provision that any lands James was found to own other than the tracts described in his will should be split between his mother and siblings.
Will and Testamentary Letter of James A. D. Sconce, Williams-Woodbury Papers, Box 2, Illinois History and Lincoln Collections, University of Illinois at Urbana-Champaign.
3Dower was a form of estate that provided for a widow’s needs out of her husband's real and personal property, and such property was not subject to creditor’s demands. In antebellum Illinois, the widow of a man with children received one-third of the land that her husband owned at any time during their marriage for the rest of her life, unless she relinquished her dower rights in the prescribed manner. If her deceased husband had no children, the widow received outright ownership of one-half of the estate.
“Dower,” Reference, Glossary, Martha L. Benner and Cullom Davis et al., eds., The Law Practice of Abraham Lincoln: Complete Documentary Edition, 2d edition (Springfield: Illinois Historic Preservation Agency, 2009), http://www.lawpracticeofabrahamlincoln.org/Reference.aspx?ref=Reference%20html%20files/Glossary.html.
4In 1852 and 1853, James A. D. Sconce had purchased over fifty tracts of land in Champaign, Iroquois, Livingston, McLean, Piatt, and Vermilion counties.
For a list of Sconce’s land purchases, search "Sconce J A D" and “Sconce James A D,” https://www.ilsos.gov/isa/landsrch.jsp.
5James A. D. Sconce named Amos Williams as executor in his will and William W. R. Woodbury was one of several men who signed an executor’s bond on February 18, 1854. James’s brother Lafayette H. Sconce was subsequently appointed administrator for the estate in August 1855.
Will and Testamentary Letter of James A. D. Sconce, Williams-Woodbury Papers, Box 2, Illinois History and Lincoln Collections, University of Illinois at Urbana-Champaign; Illinois, U.S., Wills and Probate Records, 1772-1999, 1854, Vermilion County (Lehi, UT: Ancestry.com Operations, 2015).
6An unknown person wrote this docketing.