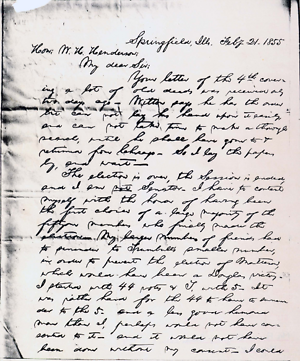 Abraham Lincoln to William H. Henderson, 21 February 18551
Springfield, Ills. Feby 21– 1855Hon: W. H. Henderson:My dear Sir:
Your letter of the 4th covering a lot of old deeds was received only two days ago–2 Wilton says he has the order but can not lay his hand upon it easily, and can not take time to make a thorough search, until he shall have gone to & returned from Chicago– So I lay the papers by, and wait–
The election is over, the Session is ended, and I am not Senator– I have to content myself with the honor of having been the first choice of a large majority of the fiftyone members who finally made the election– My larger number of friends had to surrender to Trumbull’s smaller number, in order to prevent the election of Matteson, which would have been a Douglas victory– I started with 44 votes & T. with 5– It was rather hard for the 44 to have to surrender to the 5— and a less good humored man than I, perhaps would not have consented to it— and it would not have been done without my consent– I could
<Page 2>
not, however, let the whole political result go to ruin, on a point merely personal to myself–3
Your son, kindly and firmly stood by me from first to last; and for which he has my everlasting gratitude–4
Your friend as everA. Lincoln
1Abraham Lincoln wrote and signed this letter.
2Neither William H. Henderson’s letter to Lincoln of February 4, 1855, nor the unidentified deeds it covered have been located. On behalf of Henderson, Lincoln contacted U.S. Marshal Harry Wilton regarding an order.
Lincoln provided unspecified legal service to Henderson, Martha L. Benner and Cullom Davis et al., eds., The Law Practice of Abraham Lincoln: Complete Documentary Edition, 2d edition (Springfield: Illinois Historic Preservation Agency, 2009), http://www.lawpracticeofabrahamlincoln.org/Details.aspx?case=141454.
3Lincoln had recently lost his bid to become Illinois’ next U.S. Senator when the Illinois General Assembly met in a joint session on February 8, 1855 to vote on the matter. Passage of the Kansas-Nebraska Act and its effective repeal of the Missouri Compromise had reawakened Lincoln’s passion for politics, and he threw himself into the congressional election campaign in the fall of 1854, crisscrossing Illinois to deliver speeches against the Kansas-Nebraska Act and in support of anti-Nebraska candidates. He even allowed himself to become a candidate for the Illinois General Assembly (albeit reluctantly at first). As the election campaign reached its climax, Lincoln’s name began to circulate as a possible nominee for one of the state’s U.S. Senate seats. Lincoln won election to the Illinois House of Representatives in the 1854 election, but declined the seat in late November in order to run for U.S. Senate.
In the first round of voting for the U.S. Senate seat by the General Assembly, ninety-nine votes were cast, of which Lincoln received forty-five including that of Thomas J. Turner, speaker of the House of Representatives, and anti-Nebraska Democrat Lyman Trumbull received five. But as neither they nor any other candidate received a majority of votes, several more rounds of balloting ensued. In the earliest rounds of voting, James Shields was the highest polling of the Democratic candidates, but when he failed to achieve a majority after six rounds, the Democrats shifted their votes to Joel A. Matteson on the seventh ballot. After the ninth vote, with his share of votes declining, Lincoln dropped out of contention and urged his remaining supporters to vote for Trumbull to prevent Matteson’s election and ensure that an anti-Nebraska candidate would win the seat. In the tenth and final round of voting Trumbull received fifty-one votes and won the senatorship. See the 1854 Federal Election.
David Herbert Donald, Lincoln (New York: Touchstone, 1995), 167-73; Autobiography of Abraham Lincoln Written for John L. Scripps; William H. Randolph to Abraham Lincoln; Illinois Daily Journal (Springfield), 10 November 1854, 2:5; Louis L. Emmerson, ed., Blue Book of the State of Illinois, 1923-1924 (Springfield: Illinois State Journal, 1923), 680; Illinois Senate Journal. 1855. 19th G. A., 42-55; Victor B. Howard, “The Illinois Republican Party: Part I: A Party Organizer for the Republicans in 1854,” Journal of the Illinois State Historical Society 64 (Summer 1971), 153-54; Abraham Lincoln to Elihu B. Washburne.
4Lincoln had written to Henderson’s son, Illinois state representative Thomas J. Henderson, on November 27, 1854 soliciting the latter’s support for his bid for the U.S. Senate. Thomas J. Henderson responded on December 11, 1854 that he hoped a Whig could be elected to fill the seat and stating that Lincoln and Archibald Williams had occurred to him as desirable candidates, but that Lincoln appeared to be the popular choice and he would be pleased if Lincoln were elected.
In the joint session of the General Assembly on February 8, Lincoln and Williams were both nominated for the senatorship. Williams received two votes in the second and third ballots of voting and one vote in the fourth, ninth, and tenth ballots. Thomas J. Henderson voted for Lincoln through nine rounds of balloting then at Lincoln’s urging cast his final ballot for Trumbull.
Illinois Senate Journal. 1855. 19th G. A., 242-55.