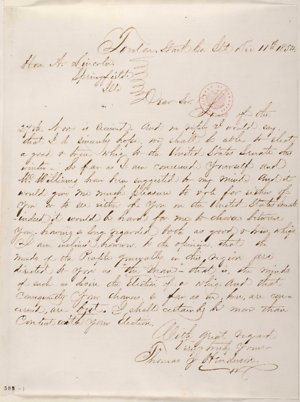 Thomas J. Henderson to Abraham Lincoln, 11 December 18541
Toulon. Stark Co. Ill. Dec 11th 1854.Hon. A. Lincoln.Springfield. Ill.Dear Sir.
Yours of the 27th. Nov.[November] is Received–2 And in reply I would say, that I do sincerely hope, we shall be able to elect a good & true whig to the United States Senate this winter– So far as I am concerned– yourself and Mr Williams have been suggested to my mind– And it would give me much pleasure to vote for either of you or to see either of you in the United States Senate— indeed it would be hard for me to chose between you— having so long regarded both as good & true whigs. I am inclined, however, to the opinion, that the minds of the People generally, in this region, are directed to you as “the man”— that is, the minds of such as desire the Election of a whig– And that consequently your chances, so far as we, here, are concerned, are best. I shall certainly be more than content with your Election.3
With Great regard–
Very Truly Yours–Thomas J. Henderson.
<Page 2>
[Envelope]
Paid
PAID
3
TOULON Ills[Illinois]
DEC 21 ^DEC[December] 12^Hon. A. Lincoln.Sprin[gfield]
[docketing]
Abraham Lincoln
T. J. Henderson–4
[docketing]
Dec 11/54[1854]5
1Thomas J. Henderson wrote and signed this letter, including the address on the envelope.
2Abraham Lincoln’s letter to Henderson requested that as a member of the Illinois General Assembly, which would select Illinois’ next U.S. Senator, Henderson would consider supporting Lincoln’s candidacy for the seat. Lincoln wrote numerous similar letters to other newly-elected members of the Illinois General Assembly in November and December of 1854 soliciting support.
Passage of the Kansas-Nebraska Act and its effective repeal of the Missouri Compromise had reawakened Lincoln’s passion for politics, and he threw himself into the congressional election campaign in the fall of 1854, crisscrossing Illinois to deliver speeches against the Kansas-Nebraska Act and in support of anti-Nebraska candidates. He even allowed himself to become a candidate for the Illinois General Assembly (albeit reluctantly at first). As the election campaign reached its climax, Lincoln’s name began to circulate as a possible nominee for one of the state’s U.S. Senate seats. Lincoln won election to the Illinois House of Representatives in the 1854 election, but declined the seat in late November in order to run for U.S. Senate. See the 1854 Federal Election.
Abraham Lincoln to Hugh Lamaster; Abraham Lincoln to Charles Hoyt; Abraham Lincoln to J. Young Scammon; Richard B. Servant to Abraham Lincoln; Abraham Lincoln to Jacob Harding; William H. Randolph to Abraham Lincoln; Robert Boal to Abraham Lincoln; John E. McClun to Abraham Lincoln; Hugh Lamaster to Abraham Lincoln; David Herbert Donald, Lincoln (New York: Touchstone, 1995), 167-73; Autobiography of Abraham Lincoln Written for John L. Scripps; Illinois Daily Journal (Springfield), 10 November 1854, 2:5; U.S. Const. art. I, § 3.
3The General Assembly met in a joint session on February 8, 1855, to make their selection for the U.S. Senate. Lincoln and Archibald Williams were both nominated for the senatorship. Of the ninety-nine votes cast in the first vote, Lincoln received forty-five and Williams, none. Because no candidate received a majority of votes, several more rounds of voting occurred. Williams received two votes in the second and third ballots, and a single vote in the fourth, after which he received no further votes until the tenth ballot. Henderson voted for Lincoln through nine rounds of balloting. At this point in the proceedings, with his share of votes declining, Lincoln dropped out of contention and urged his supporters to vote for anti-Nebraska Democrat Lyman Trumbull in order to ensure that an anti-Nebraska politician filled the seat. Henderson cast his ballot for Trumbull in the tenth and final round of voting, at which point Trumbull was declared the victor. See the 1854 Federal Election.
Illinois Senate Journal. 1855. 19th G. A., 1st sess., 242-55; Victor B. Howard, “The Illinois Republican Party Part I: A Party Organizer for the Republicans in 1854,” Journal of the Illinois State Historical Society 64 (Summer 1971), 153-54; Abraham Lincoln to Elihu B. Washburne.
4Lincoln wrote this docketing.
5An unknown person wrote this docketing.