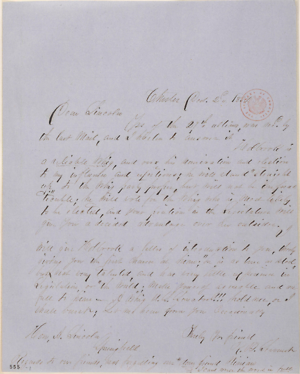 Richard B. Servant to Abraham Lincoln, 2 December 18541
Chester Decr 2d 1854Dear Lincoln
Yrs[Yours] of the 27th ultimo, was recd[received] by the last Mail, and I hasten to answer it2
Holbrook is a reliable Whig, and ow[e]s his nomination and election to my influence and exertions; he will stand “straight up” to the Whig party proper, but will not be impracticable; he will vote for the Whig who is most likely to be elected, and your position in the Legislature will give You a decided advantage over an outsider.3
I will give Holbrook a letter of introduction to you, thereby giving you the first chance at him; “he is as true as steel” but not very talented, and has very little experience in Legislation, or “the World”; make yourself agreeable and usefull to him– A Whig U.S. Senator!!! hold me, or I shall burst; Let me hear from you Occasionally
Truly Yr[Your] friendR. B. ServantHon, A. LincolnSpringfieldRegards to our friends, not forgetting our “dem friend Ninian4
I cant write the word in full
<Page 2>
[Envelope]
CHESTER Illinois
DEC[December] 4Hon. Abram LincolnSpringfieldIllinois
[docketing]
Abraham Lincoln
Col[Colonel] R. B. Servant.5
[docketing]
Dec 2/54[1854]6
1Richard B. Servant wrote and signed this letter, including the address on the envelope.
2Abraham Lincoln’s letter to Servant of November 27, 1854 has not been located, but was likely similar to others he wrote around that time requesting his allies’ help in canvassing their Illinois General Assembly members for support of his potential candidacy for a seat in the U.S. Senate.
Passage of the Kansas-Nebraska Act and its effective repeal of the Missouri Compromise had reawakened Lincoln’s passion for politics, and he threw himself into the congressional election campaign in the fall of 1854, crisscrossing Illinois to deliver speeches against the Kansas-Nebraska Act and in support of anti-Nebraska candidates. He even allowed himself to become a candidate for the Illinois General Assembly (albeit reluctantly at first). As the election campaign reached its climax, Lincoln’s name began to circulate as a possible nominee for one of the state’s U.S. Senate seats. Lincoln won election to the Illinois House of Representatives in the 1854 election, but declined the seat in late November in order to run for U.S. Senate. See the 1854 Federal Election.
Abraham Lincoln to Hugh Lamaster; William H. Randolph to Abraham Lincoln; Robert Boal to Abraham Lincoln; John E. McClun to Abraham Lincoln; David Herbert Donald, Lincoln (New York: Touchstone, 1995), 167-73; Autobiography of Abraham Lincoln Written for John L. Scripps; Illinois Daily Journal (Springfield), 10 November 1854, 2:5.
3The General Assembly met in a joint session on February 8, 1855, to make their selection for the U.S. Senate. James C. Holbrook cast his vote for Lincoln in all of the first seven rounds of voting. For the eighth and ninth votes, Holbrook switched his support to anti-Nebraska Democrat Lyman Trumbull. After the ninth vote, with his share of votes declining, Lincoln dropped out of contention and urged his remaining supporters to vote for Trumbull to ensure that an anti-Nebraska candidate would be elected. Holbrook again voted for Trumbull in the tenth round of voting, at which point Trumbull was declared the victor. See the 1854 Federal Election.
Illinois Senate Journal. 1855. 19th G. A., 242-55; Victor B. Howard, “The Illinois Republican Party: Part I: A Party Organizer for the Republicans in 1854,” Journal of the Illinois State Historical Society 64 (Summer 1971), 153-54; Abraham Lincoln to Elihu B. Washburne.
4Lincoln’s brother-in-law, Ninian W. Edwards, had switched his political affiliation from Whig to Democrat in the early 1850s.
Newton Bateman and Paul Selby, eds., Historical Encyclopedia of Illinois and History of Sangamon County (Chicago: Munsell, 1912), 1:152-53.
5Lincoln wrote this docketing.
6An unknown person wrote this docketing.