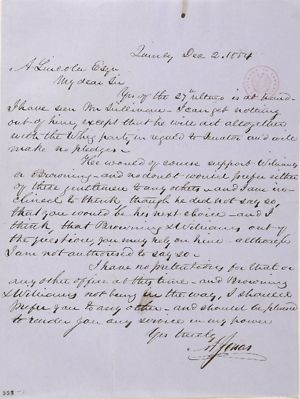 Abraham Jonas to Abraham Lincoln, 2 December 18541
Quincy Dec 2, 1854A Lincoln Esqr[Esquire]My dear Sir
Yrs[Yours] of the 27th Ultmo is at hand–2 I have seen Mr Sullivan– I can get nothing out of him, except that he will act altogether with the Whig party in regard to Senator and will make no pledges–3
He would of course support Williams or Browning— and no doubt would prefer either of these gentlemen to any others, and I am inclined to think, though he did not say so, that you would be his next choice— and I think, that Browning & Williams out of the question, you may rely on him— although I am not authorised to say so–
I have no pretentions for that or any other office at this time— and Browning & Williams not being in the way, I should prefer you to any other— and should be pleased to render you any service in my power4
Yrs truelyA Jonas
<Page 2>
[Envelope]
QUINCY Ill.
DEC[December] 4A Lincoln EsqrSpringfieldIlls
[docketing]
Abraham Lincoln
A. Jonas, No 2.5
[docketing]
Dec 2 54[1854]6
1Abraham Jonas wrote and signed this letter.
2Abraham Lincoln’s letter to Jonas has not been located, but was likely similar to others Lincoln wrote in November 1854 requesting his allies’ help in canvassing their local Illinois General Assembly members for support of his potential candidacy for a seat in the U.S. Senate. Passage of the Kansas-Nebraska Act and its effective repeal of the Missouri Compromise had reawakened Lincoln’s passion for politics, and he threw himself into the congressional election campaign in the fall of 1854, crisscrossing Illinois to deliver speeches against the Kansas-Nebraska Act and in support of anti-Nebraska candidates. He even allowed himself to become a candidate for the Illinois General Assembly (albeit reluctantly at first). As the election campaign reached its climax, Lincoln’s name began to circulate as a possible nominee for one of the state’s U.S. Senate seats. U.S. senators were chosen at this time by the Illinois General Assembly, thus Lincoln’s interest in gauging the members’ political leanings.
Abraham Lincoln to Charles Hoyt; Abraham Lincoln to J. Young Scammon; Abraham Lincoln to Jacob Harding; David Herbert Donald, Lincoln (New York: Touchstone, 1995), 167-73; Autobiography of Abraham Lincoln Written for John L. Scripps; William H. Randolph to Abraham Lincoln; U.S. Const. art. I, § 3.
3Henry V. Sullivan represented Adams County in the Illinois House of Representatives.
Louis L. Emmerson, ed., Blue Book of the State of Illinois, 1923-1924 (Springfield: Illinois State Journal, 1923), 681.
4The state’s voters sent an anti-Nebraska majority to the Illinois General Assembly, in which Lincoln also won a seat. However, in late-November 1854, he declined to serve in order to run for the U.S. Senate. Ultimately, Lincoln did not win election to the U.S. Senate; the Illinois General Assembly selected anti-Nebraska Democrat Lyman Trumbull instead. Sullivan shifted his allegiance between Lincoln, Archibald Williams, and Orville H. Browning until the tenth ballot, when he switched to Trumbull. See the 1854 Federal Election.
Stephen Hansen and Paul Nygard, “Stephen A. Douglas, the Know-Nothings, and the Democratic Party in Illinois, 1854-1858,” Illinois Historical Journal 87 (Summer 1994), 114; Michael Burlingame, Abraham Lincoln: A Life (Baltimore: The Johns Hopkins University Press, 2008), 1:392, 401-2; John Clayton, comp., The Illinois Fact Book and Historical Almanac, 1673-1968 (Carbondale: Southern Illinois University Press, 1970), 220-21; Illinois Daily Journal (Springfield), 10 November 1854, 2:5; Illinois Senate Journal. 1855. 19th G. A., 242-55.
5Lincoln wrote this docketing.
6An unknown person wrote this docketing.