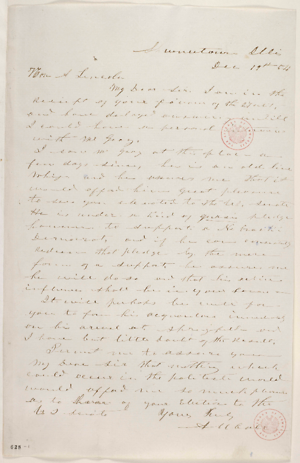 Andrew McCallen to Abraham Lincoln, 19 December 18541
Shawneetown Ills
Dec 19th 54Hon A LincolnMy Dear Sir,
I am in the Receipt of your favour of the 27 ult, and have delayed answering untill I could have a personal interview with Mr Gray.2
I saw Mr Gray at this place a few days since, he is an old line Whig, and he assures me that it would afford him great pleasure to see you & be voted to the US. senate3 He is under a kind of quasi pledge however, to support a Nebraska Democrat, and if he can consistently Redeem that pledge by the mere form of a support, he assures me he will do so and that his active influence shall be in your favour–4
It will perhaps be well for you to form his acquaintance immediately on his arival at Springfield— and I have but little doubt of the Result.
Permit me to assure you My Dear sir that nothing which could occur in the political world would afford me so much pleasure as to hear5 of your election to the US Senate
Yours TrulyA McCallen
<Page 2>
[Envelope]
SH[AWNEETOWN] Ill.[Illinois]
DEC[December] 20Hon A. LincolnSprigfieldIll
[docketing]
Abraham Lincoln
A. McCallen6
[docketing]
Dec 19/54[1854]7
1Andrew McCallen wrote and signed this letter, including the address on the envelope.
2Abraham Lincoln’s letter to McCallen has not been found.
3Lincoln undoubtedly wrote McCallen on November 27, 1854, to solicit support for his U.S. Senate run. Passage of the Kansas-Nebraska Act and its effective repeal of the Missouri Compromise reawakened Lincoln’s passion for politics, and he threw himself into the congressional election campaign in the fall of 1854, crisscrossing Illinois to deliver speeches against the Kansas-Nebraska Act and in support of anti-Nebraska candidates. He even allowed himself to become a candidate for the Illinois General Assembly (albeit unwillingly at first). As the election campaign reached its climax, Lincoln’s name began to circulate as a possible nominee for one of the state’s U.S. Senate seats. In November and December 1854, Lincoln wrote confidential letters to political allies seeking support for his candidacy and information about his prospects. Lincoln won election to the Illinois House of Representatives in the 1854 election, but declined the seat in late November in order to run for U.S. Senate. When the General Assembly met in a joint session on February 8, 1855, ten rounds of voting were needed to finally determine a victor. Lincoln received a majority of the anti-Nebraska votes until the tenth and final ballot, when he withdrew and urged his supporters to vote for anti-Nebraska Democrat Lyman Trumbull in order to ensure that an anti-Nebraska politician filled the seat. With the votes of Lincoln’s supporters, Trumbull won the seat. See 1854 Federal Election.
David Herbert Donald, Lincoln (New York: Touchstone, 1995), 167-73; William H. Randolph to Abraham Lincoln; Autobiography of Abraham Lincoln Written for John L. Scripps; Abraham Lincoln to Hugh Lamaster; Abraham Lincoln to Joseph Gillespie; Abraham Lincoln to Horace W. Fay; Illinois Daily Journal (Springfield), 10 November 1854, 2:5; Victor B. Howard, “The Illinois Republican Party: Part I: A Party Organizer for the Republicans in 1854,” Journal of the Illinois State Historical Society 64 (Summer 1971), 153-54; Abraham Lincoln to Elihu B. Washburne; Illinois Senate Journal. 1855. 19th G. A., 242-55.
4In the ten rounds required for a victor of the Senate seat, George M. Gray voted for Joel A. Matteson in the first, second, fourth, and the seventh through the tenth rounds. He voted for William A. Denning in the third round, James Shields in the fifth round, and John A. Logan in the six round.
Illinois Senate Journal. 1855. 19th G. A., 242-55.
5"learn" changed to "hear."
6Lincoln wrote this docketing.
7An unknown person wrote this docketing.