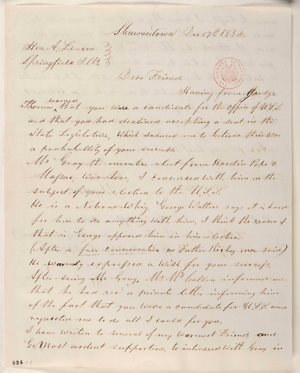 John W. Norton to Abraham Lincoln, 17 December 18541
Shawneetown Dec 17th 1854.Hon A. LinconSpringfield IllsDear Friend,
Having from Judge Thomas ^learned^ that you were a candidate for the office of U.S.S. and that you had declined accepting a seat in the State Legislature, which induced me to believe their was a probability of your success.2
Mr Gray the member elect from Hardin Pope & Massac, was here. I conversed with him on the subject of your election to the U.S.S.[United States Senate]
He is a Nebraska Whig. George Watters says it is hard for him to do any thing with him. I think the reason of that is George opposed him in his election. (After a free conversation as Father Richey once said) He warmly expressed a wish for your success. After seeing Mr Gray, Mr McCallen informed me that he had rec[received] a private letter informing him of the fact that you were a candidate for U.S.S. and requested me to do all I could for you.
I have writen to several of my warmest Friends and Gs most ardent supporters,3 to interseed with Gray in
<Page 2>
your behaft.4 I know they will do it, and will be well calculated to induce him to give you his aid. I think by the time He gets to Springfield you will be able to use him to your best service I intended to have given him a letter of Introduction to you, but was unable to do so, he left whilst I was on the G[Grand] Jury, it being in session. 5
He is not in favour of Shields for U.S.S. I think he will not voat for any Forneigner.6
Accept my best wishes for your success.
Believe me to be your sincere Friend & Humble servantJ. W. NortonP. S. The Land Office closed S. K. Casey the Receiver (here, (my successor,) resigned his office last week. 7J. W. N.
<Page 3>
[Envelope]
SHAWNEETOWN [?]
[?]Hon. A. LinconSpringfieldIllinois
[docketing]
12/17/1854
Abraham Lincoln
J W. Norton8
[docketing]
Dec[December] 17/54[1854]9
1John W. Norton wrote and signed this letter.
2Passage of the Kansas-Nebraska Act and its effective repeal of the Missouri Compromise reawakened Abraham Lincoln’s passion for politics, and he threw himself into the congressional election campaign in the fall of 1854, crisscrossing Illinois to deliver speeches against the Kansas-Nebraska Act and in support of anti-Nebraska candidates. He even allowed himself to become a candidate for the Illinois General Assembly (albeit unwillingly at first). As the election campaign reached its climax, Lincoln’s name began to circulate as a possible nominee for one of the state’s U.S. Senate seats. In November and December 1854, Lincoln wrote confidential letters to political allies seeking support for his candidacy and information about his prospects. Lincoln won election to the Illinois House of Representatives in the 1854 election, but declined the seat in late November in order to run for U.S. Senate. When the General Assembly met in a joint session on February 8, 1855, ten rounds of voting were needed to finally determine a victor. Lincoln received a majority of the anti-Nebraska votes until the tenth and final ballot, when he withdrew and urged his supporters to vote for anti-Nebraska Democrat Lyman Trumbull in order to ensure that an anti-Nebraska politician filled the seat. With the votes of Lincoln’s supporters, Trumbull won the seat. See 1854 Federal Election.
David Herbert Donald, Lincoln (New York: Touchstone, 1995), 167-73; William H. Randolph to Abraham Lincoln; Autobiography of Abraham Lincoln Written for John L. Scripps; Abraham Lincoln to Hugh Lamaster; Abraham Lincoln to Joseph Gillespie; Abraham Lincoln to Horace W. Fay; Abraham Lincoln to Jesse O. Norton; Illinois Daily Journal (Springfield), 10 November 1854, 2:5; Victor B. Howard, “The Illinois Republican Party: Part I: A Party Organizer for the Republicans in 1854,” Journal of the Illinois State Historical Society 64 (Summer 1971), 153-54; Illinois Senate Journal. 1855. 19th G. A., 242-55.
3“G” could not be positively identified.
4On December 17, the same day as this letter was written, Horace Hayward wrote to Lincoln that George M. Gray had, “pledged to vote for a Democratic Senator.” Andrew McCallen wrote on December 19 that Gray, though he had “quasi pledged” to support an anti-Nebraska Democrat, would be pleased to see Lincoln in the U.S. Senate. McCallen wrote that if Gray could simply redeem his pledge by mere form he would do so and use his influence on Lincoln’s behalf.
5Norton is most likely referencing the grand jury for the Gallatin County Circuit Court. The fall session of the court opened on December 11, 1854,
“An Act to Regulate the Times of Holding Courts in the Fifth and Twelfth Judicial Circuits,” 22 June 1852, Laws of Illinois (1852), 177.
6James Shields was born in the United Kingdom.
In the election for U.S. Senate, Gray cast no votes for Lincoln. Instead, he nominated Joel A. Matteson and voted for him in seven of the rounds, intermittently switching his vote to other candidates, including William A. Denning, John A. Logan, and Shields.
Stephen L. Hansen, "Shields, James," American National Biography, ed. by John A. Garraty and Mark C. Carnes (New York: Oxford University Press, 1999), 19:838; Illinois Senate Journal. 1855. 19th G. A., 242-55.
7By September 1855, the U.S. General Land Office in Shawneetown had reopened, with John M. Cunningham as the register and William L. Caldwell as the receiver, replacing Samuel K. Casey.
Register of Officers and Agents, Civil, Military, and Naval, in the Service of the United States, on the Thirtieth September, 1855 (Washington, DC: A. O. P. Nicholson, 1855), 81, 82.
8Lincoln wrote this docketing.
9An unknown person wrote this docketing.