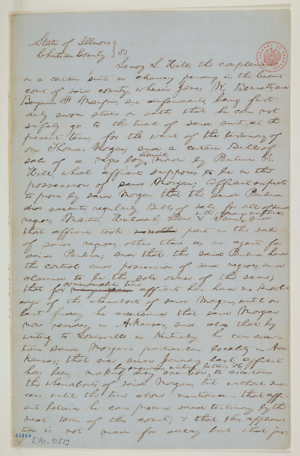 Affidavit of Leroy L. Hill in Hill v. Bennett and Maupin, 18 November 18511
Leroy L. Hill, the complainant in a certain suit in chancery pending in the Circuit court of said county, wherein James W, Bennett,2 and Benjamin F Maupin, are defendants, being first duly sworn states on oath that he can not safely go to the trial of said suit at the present term, for the want of the testimony of one Thomas Morgan, and a certain Bill of sale of a negro boy ^ Daniel,^ made by Paulina T. Hill, which affiant supposes to be in the possession of said Morgan; affiant expects to prove by said Morgan, that the said Paulina did execute, regularly, Bills of sale, for all of said negroes, Martin, Huldah, Dan– & Sam– ^in the pleadings mentioned;^ and that affiant took no ^no^ other part in the sale of said negroes, other than as an agent for said Paulina; and that the said Paulina had the control and possession of said negroes, and claimed to be the sole owner of the same; that for many years ^considerable time^ affiant has had no knowledge of the whereabouts of said Morgan, until on last Friday he ascertained that said Morgan now resides in Arkansas, and also, that by writing to Louisville in Kentucky, he can ascertain said Morgan’s particular locality in Arkansas; that ever since January last, affiant has been making every exertion ^by enquiries, writing letters &c,[etc.] ^ to ascertain the whereabouts of said Morgan, but without success until the time above mentioned– that affiant believes he can procure said testimony by the next term of this court; & that this application is not made for delay but that jus-
<Page 2>
tice may be done in the premises–3
Leroy L. Hill
[certification]
11/18/1851
Moore, William S.
Sworn to and subscribed before me this 18th day of November AD 1851
Wm S Moore clk[clerk]4
[docketing]
11/18/1851
Moore, William S.
[docketing]
11/18/1851
Moore, William S.
filed Nov. 18th 1851.
Wm S. Moore
clerk6
1Abraham Lincoln wrote the text of this affidavit from the word “Leroy” to the word “premises.” Leroy L. Hill signed his own name.
2Lincoln mistakenly wrote James W. Bennett; the actual defendant was William J. Bennett.
3In the 1830s, brothers Leroy and Silas Hill purchased 320 acres of land for $800. This land was on Bear Creek in Christian County, Illinois. The brothers gave the seller a promissory note for the sale price, and Silas mortgaged the land to ensure payment of the note. In 1841, Silas Hill died, and Paulina T. Hill, his widow, assumed responsibility for managing the land and paying the mortgage. In March 1848, Bennett, Paulina T. Hill’s son from a previous marriage, purchased the north portion of the land for $400. In 1850, Bennett sold the land to Benjamin F. Maupin, his brother-in-law, for $400. Leroy L. Hill claimed to have paid the interest payments on the mortgage since the original land purchase, and he wanted Bennett to reimburse him for these payments, which he claimed Bennett agreed to do under terms of the 1848 sale agreement. Bennett failed to pay the whole amount due, and in February 1850, Hill sued Bennett and Maupin for $317.12, the amount of the interest payments. In an answer and cross-bill filed in August 1850, Maupin countered that Leroy L. Hill had not made all the interest payments he claimed to have made and that he had swindled Bennett into a usurious sale agreement. He also asserted that Leroy L. Hill had sold four slaves owned by Paulina T. Hill and kept the proceeds for himself, negating any claims that Leroy L. Hill may have against either Paulina T. Hill or Bennett. Paulina T. Hill and her mother, Elizabeth H. Haily, testified in January 1851 that Leroy L. Hill had sold the four slaves and kept the proceeds of the sales. They also testified that Leroy L. Hill had no claim to the land Paulina T. Hill sold to Bennett.
Hill retained Lincoln, John T. Stuart, and Benjamin S. Edwards, and Lincoln took this affidavit, requesting a continuance of the case until Thomas Morgan, one of the slave purchasers, could testify. Judge David Davis approved the motion for a continuance.
In June 1852, Lincoln and his co-counselors moved to dismiss the lawsuit. Leroy L. Hill agreed to pay all court costs, and Judge Davis dismissed the lawsuit without prejudice, allowing both sides to withdraw their evidence.
For documents related to this case, see Hill v. Bennett & Maupin, Martha L. Benner and Cullom Davis et al., eds., The Law Practice of Abraham Lincoln: Complete Documentary Edition, 2d edition (Springfield: Illinois Historic Preservation Agency, 2009), http://www.lawpracticeofabrahamlincoln.org/Details.aspx?case=136752. See also Daniel W. Stowell et al., eds., The Papers of Abraham Lincoln: Legal Documents and Cases (Charlottesville: University of Virginia Press, 2008), 2:302-4.
4William S. Moore wrote and signed this certification.
5Moore wrote this docketing.
6Moore wrote and signed this docketing.