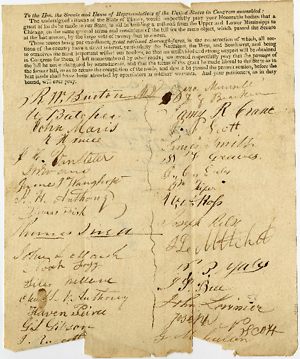 Petition of R. W. Burton and Others to U.S. Congress, [29 January 1849]1
To the Hon. the Senate and House of Representatives of the United States in Congress assembled:
The undersigned citizens of the State of Illinois, would respectfully pray your Honorable bodies that a grant of lands be made to our State, to aid in building a railroad from the Upper and Lower Mississippi to Chicago, on the same general terms and conditions of the bill for the same object, which passed the Senate at the last session, by the large vote of twenty-four to eleven.2
These routes being par excellence, great national thorough-fares, in the construction of which, all sections of the country have a direct interest, particularly the Northeast, the West, and Southwest, and being to ourselves the most important within our borders, so that an undivided and strong support will be obtained in Congress for them, if left unencumbered by other roads; we would respectfully pray that the passage of the bill be not endangered by amendments, and that the terms of the grant be made liberal to the State as in the former bill, so as to secure the completion of the roads, and that it be passed the present session, before the best lands shall have been absorbed by speculators in soldiers’ warrants. And your petitioners, as in duty bound, will ever pray.3
<Page 2>
[docketing]
Ill[Illinois]
[docketing]
Lincoln, Abraham (President)
A petition of certain citizens of the State of Illinois, praying a grant of Lands to aid in the construction of a Rail Road–4
[docketing]
Lincoln, Abraham (President)
Refer to Com:[Committee] on Pub.[Public] Lands.
A. Lincoln5
[docketing]
01/29/1849
1849
January 29 Referred to the Committee on Public Lands.
[docketing]