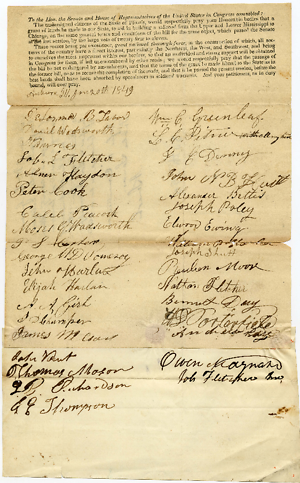 Petition of William C. Greenleaf and Others to U.S. Congress, 20 January 18491
To the Hon. the Senate and House of Representatives of the United States in Congress assembled:
The undersigned citizens of the State of Illinois, would respectfully pray your Honorable bodies that a grant of lands be made to our State, to aid in building a railroad from the Upper and Lower Mississippi to Chicago, on the same general terms and conditions of the bill for the same object, which passed the Senate at the last session, by the large vote of twenty-four to eleven.2
These routes being par excellence, great national thorough-fares, in the construction of which, all sections of the country have a direct interest, particularly the Northeast, the West, and Southwest, and being to ourselves the most important within our borders, so that an undivided and strong support will be obtained in Congress for them, if left unencumbered by other roads; we would respectfully pray that the passage of the bill be not endangered by amendments, and that the terms of the grant be made liberal to the State as in the former bill, so as to secure the completion of the roads, and that it be passed the present session, before the best lands shall have been absorbed by speculators in soldiers’ warrants. And your petitioners, as in duty bound, will ever pray.3
Auburn Ill. Jan 20th 1849
<Page 2>
[docketing]
Lincoln, Abraham (President)
Petition of Wm[William] C. Greenleaf, and others, citizens of Sangamon county, Illinois asking a grant of lands to aid in the construction of a Rail Road from the Upper & Lower Missippi to Chicago, in said state4
[docketing]
01/29/1849
Lincoln, Abraham (President)
Refer to Committee on Public Lands–
A Lincoln5
[docketing]
30th — 95
1An unknown author wrote the dateline on this printed petition. Abraham Lincoln penned two instances of docketing on the last page, and signed one.
2Senator Stephen A. Douglas introduced this bill--S. 95-- in the Senate on January 20, 1848, and the Senate referred it to the Committee on Public Lands. The committee reported back the bill on January 24 without amendment. The Senate passed the bill on May 4. On August 12, the House of Representatives refused to read the bill a third time by a vote of 73 yeas to 79 nays, with Lincoln voting yea.
S. 95, 30th Cong. (1848); U.S. Senate Journal. 1848. 30th Cong., 1st sess., 125, 129, 290, 314, 592; U.S. House Journal. 1848. 30th Cong., 1st sess., 1270; Cong. Globe, 30th Cong., 1st Sess., 214, 230, 723 (1848).
3Lincoln presented this petition in the U.S. House of Representatives on January 29, 1849. The House referred the petition to the Committee on Public Lands. Many petitions on this topic were presented by Illinois congressmen between January 29 and February 24, with Lincoln himself presenting at least six, but it does not appear that the House of Representatives acted upon them.
U.S. House Journal. 1849. 30th Cong., 2nd sess., 337, 344, 361, 380, 390, 415, 420, 429, 440, 445, 475, 498, 529; Petition of R. W. Burton and Others to U.S. Congress; Petition of Ezekiel Bowman and Others to U.S. Congress; Petition of R. C. Cowden and Others to U.S. Congress; Petition of A. H. H. Perkins and Others to U.S. Congress; Petition of Thomas Karr and others to U.S. Congress.
4Lincoln wrote this docketing.
5Lincoln wrote and signed this docketing.