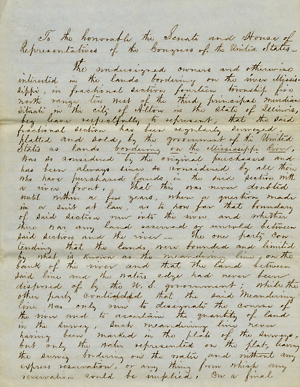 Petition of James Semple and Others to U.S. Congress, [1847]1
To the honorable the Senate and House of Representatives of the Congress of the United States–
The undersigned owners and otherwise interested in the lands bordering on the river Mississippi, in fractional section fourteen township five north range ten west of the third principal meridian situate in the city of Alton in the state of Illinois, beg leave respectfully to represent, that the said fractional section has been regularly surveyed, platted and sold by the government of the United States as lands bordering on the Mississippi River, was so considered by the original purchasers and has been always since so considered by all those who have purchased lands in the said section with a river front, That this was never doubted until within a few years, when a question made in a suit at law, as to how far that boundary of said section run into the river and whether there was any land reserved or unsold between said section and the river– The one party contending that the lands were bounded and limited by what is known as the meandering line on the bank of the river and that the land between said line and the waters edge had never been disposed of by the U.S. government; while the other party contended that the said Meandering line was only run to designate the course of the river and to ascertain the quantity of land in the survey, such meandering line never having been marked in the plats of the surveys, but only the water represented on the plat, leaving the survey bordering on the water and without any express reservation, or any thing from which any reservation could be implied. On a final
<Page 2>
hearing of this case in the Supreme court of the state, it was decided that private rights to the said land extended to the middle of the main channel of the river and that the owners of the land had a right to occupy the land as far as it could be occupied or in other words to the lowest water mark– see the case ofMiddleton vs Pritchard 3d Scam.[Scammon] 510.for a full explanation of this case–2 After the decision of this case the undersigned supposed that the question was finally settled as to the rights of the parties and all persons owning lands bordering on the river under similar circumstances– Yet notwithstanding the undersigned have recently been informed that a petition has been forwarded to Washington by the city corporation of the city of Alton asking Congress to grant what they consider to be unsold lands bordering on the river within said city as aforesaid.3 The undersigned beg leave to remonstrate against any such grant as being intended to throw a cloud over their tittle to the land aforesaid and as an absolute infringement of their rights as owners and proprietors of said lands and pray that on an full investigation of the subject the said petition of said city may be rejected as unjust and improper–
James SempleBenjamin S. EdwardsNinian W. EdwardsJohn Cook4C Edwards By N G EdwardsBenjamin GodfreyWilliam Russell By A. [Beath?] agt[agent]
<Page 3>
<Page 4>
[docketing]
Lincoln, Abraham (President)
The Remonstrance of James Semple & others, against the Petition of the City of Alton in the State of Illinois, praying a relinquishment of certain lands therein described–
[docketing]
01/04/1848
January 4, 1848 Referred to the Committee on Public Lands
[docketing]
Lincoln, Abraham (President)
Refer to Com: on Public Lands.
[docketing]
Lincoln, Abraham (President)
A. Lincoln
[docketing]
26
1Abraham Lincoln wrote the first, third, and fourth instances of docketing on the last page. Lincoln presented this petition in the U.S. House of Representatives on January 4, 1848. It was referred to the Committee on Public Lands.
U.S. House Journal. 1848. 30th Cong., 1st sess., 189.
2Thomas Middleton, appellant, v. Charles Pritchard et al., appellees, 4 Ill. (3 Scammon) (1843) 510-14.
3On December 18, 1847, Representative Robert Smith presented to the House of Representatives a petition from the mayor of Alton, requesting a grant to the city of unsurveyed lands lying within the city limits. The petition was referred to the Committee on Public Lands.
U.S. House Journal. 1847. 30th Cong., 1st sess., 111.
4This individual may be John Cook of Springfield, Illinois.

Petition of James Semple and Others to U.S. Congress. [1847-XX-XX]. https://papersofabrahamlincoln.org/documents/D287675. The Papers of Abraham Lincoln Digital Library.