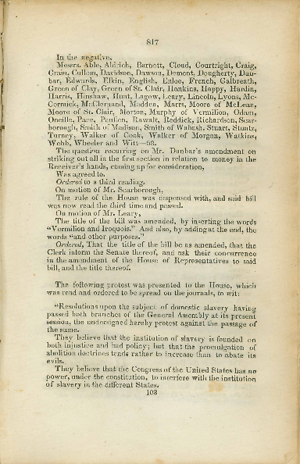 Related Document(s):
Report of Joint Select Committee and Proposed Resolution regarding the Abolition of Slavery

Protest in Illinois Legislature on Slavery, 3 March 1837
The following protest was presented to the House, which was read and ordered to be spread on the journals, to wit:
“Resolutions upon the subject of domestic slavery having passed both branches of the General Assembly at its present session, the undersigned hereby protest against the passage of the same.1
They believe that the institution of slavery is founded on both injustice and bad policy; but that the promulgation of abolition doctrines tends rather to increase than to abate its evils.
They believe that the Congress of the United States has no power, under the constitution, to interfere with the institution of slavery in the different States.
<Page 2>
They believe that the Congress of the United States has the power, under the constitution, to abolish slavery in the District of Columbia; but that that power ought not to be exercised unless at the request of the people of said District.
The difference between these opinions and those contained in the said resolutions, is their reason for entering this protest.”
DAN STONE,A. LINCOLN,
Representatives from the connty of Sangamon.
1On December 29, 1836, Governor Joseph Duncan transmitted to the House of Representatives memorials, reports, and resolutions from the legislatures of the states of Virginia, Alabama, Mississippi, New York, and Connecticut, “relative to the existence of domestic slavery” in the South. The House Journal offers no clue as to the content of these documents, but subsequent action by the House and Senate suggest that they were critical of abolitionist societies. Particularly galling to some was the American Anti-Slavery Society, which was flooding the mails with pamphlets condemning slavery and slaveholders, and which was in the midst of a petition drive to abolish the slave trade in the District of Columbia. Southern legislatures and pro-slavery forces in the North were clamoring for legislatures in the North to join them in opposing the American Anti-Slavery Society and in condemning abolitionism.
The House referred the governor’s communication and the associated documents to a joint select committee consisting of seven representatives and four senators. The House immediately selected its representatives on the joint committee, and the Senate, after voting down a motion to indefinitely postpone consideration, named its participants on December 30. On January 12, 1837, the joint select committee issued its report, which concluded with four proposed resolutions. The Senate tabled the report and proposed resolutions, but on January 13, the House referred the proposed resolutions to a select committee of five. The select committee reported back the resolutions on January 20 with an amendment to each resolution. The House Journal provides no text for these amendments. The House readily concurred in the amendments to the first and second resolutions, respectively, but the amendment to the third sparked debate and numerous amendments from the floor. Abraham Lincoln moved to amend the second clause of the amendment by inserting after the word “Congress,” the words, “unless the people of said District petition for the same.” Lincoln’s motion failed and, after amendment to the first clause, the House concurred in the third resolution as amended. The House concurred in the amendment to the fourth resolution, and adopted the resolutions of the joint select committee as amended by a vote of 77 yeas to 6 nays, with Lincoln voting nay. The Senate concurred on January 25 by a vote of 32 yeas to 0 nays. On January 30, the General Assembly delivered the report of the joint select committee and the resolutions to Governor Duncan.
The House Journal did not print the text of the final resolutions, but the resolutions as modified did not satisfy Lincoln and Daniel Stone, who issued their protest six weeks later, after the General Assembly had passed, among other important pieces of legislation, an act to move the state capital from Vandalia to Springfield, and an act creating the Illinois Internal Improvement System.
Illinois House Journal. 1836. 10th G. A., 1st sess., 134, 148, 241-44, 248-49, 309-11, 415, 418; Illinois Senate Journal. 1836. 10th G. A., 1st sess., 129-30, 195-98, 262, 277, 297, 313, 316.