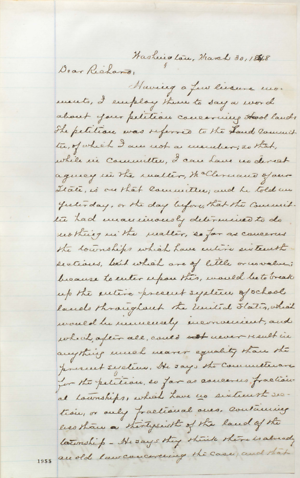 Abraham Lincoln to Richard S. Thomas, 30 March 18481
Washington, March 30, 1848Dear Richard:
Having a few leisure moments, I employ them to say a word about your petition concerning school lands2 The petition was referred to the Land Committee, of which I am not a member; so that, while in Committee, I can have no direct agency in the matter, McClernand of our State, is on that Committee; and he told me yesterday, or the day before, that the Committee had unanimously determined to do nothing in the matter, so far as concerns the townships which have entire sixteenth sections, but which are of little or no value; because to enter upon this, would be to break up the entire present system of school lands throughout the United States, which would be immensely inconvenient, and which, after all, could not never result in any thing much nearer equality than the present system.3 He says the Committee are for the petition, so far as concerns fractional townships, which have no sixteenth section, or only fractional ones, containing less than a thirtysixth of the land of the township– He says they think there is already an old law concerning the case; and that
<Page 2>
they are investigating it, and if necessary to effect the object, they will report a bill accordingly4
Yours as EverA. Lincoln–
1Abraham Lincoln did not write this letter, but it is attributed to him. The original letter in Lincoln’s hand has not been found.
2During the first session of the Thirtieth Congress, Richard S. Thomas and numerous other citizens from Cass County, Illinois, had sent a petition to Congress requesting a law allowing the county, which had townships with worthless sixteenth sections or fractional townships without sixteenth sections, to select other land in lieu thereof, and the lands to be selected to be granted by the United States to the state of Illinois for the use of the inhabitants for schools.
3 Federal law policy regarding school land rested on provisions of the Land Ordinance of 1785, which reserved the sixteenth section of each full thirty-six-section township to support public schools within the township. The Land Ordinance of 1785 did not address the issue of fractional townships with no sixteenth sections or partial sixteenth sections, so various state legislatures and Congress often had to pass laws or make special provisions to allow for the sale of fractional sixteenth sections or substitute sections for public education.
An Act Providing for the Sale of the Fractional Sixteenth Section, in Township Six North, Range Twelve West, and Such other Lands as Have Been Selected in Lieu of the Sixteenth Section in the Fractional Townships, on the Mississippi and Illinois Rivers, in Green County; An Act Granting a Half Section of Land for the Use of Schools within Fractional Township 19, South of Range 18 West, County of Lowndes, State of Mississippi.
4In another letter written on June 13, Lincoln reiterated his belief that the House and Senate Committees on Public Lands were satisfied with existing law on the subject, and expressed his doubt that additional legislation would pass, but promised to inquire at the General Land Office on June 14 and inquire into the matter and write Thomas again. Lincoln made the inquiry, and on June 14, Commissioner Richard M. Young sent Lincoln a letter that included a copy of a 1826 law governing the issue. On June 15, Lincoln wrote Thomas as promised and sent him a copy of Commissioner Young’s letter and the 1826 law. Following Lincoln’s advice, Thomas published Commissioner Young’s letter and the 1826 law in the Beardstown Gazette on July 12, 1848.
“An Act to Appropriate Lands for the Support of Schools in Certain Townships and Fractional Townships, Not Before Provided for,” 20 May 1826, Statutes at Large of the United States 4 (1846):179; Beardstown Gazette (Illinois), 12 July 1848, 1:3.