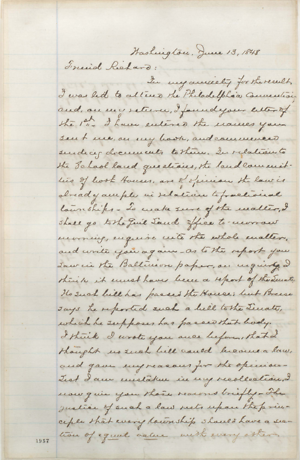 Abraham Lincoln to Richard S. Thomas, 13 June 18481
Washington, June 13, 1848Friend Richard:
In my anxiety for the result, I was led to attend the Philadelphia Convention;2 and, on my return, I found your letter of the 1st–3 I have entered the names you sent me, on my book, and commenced sending documents to them. In relation to the School land questions, the land committees of both Houses, are of opinion the law is already ample in relation to fractional townships–4 To make sure of the matter, I shall go to the Gen’l Land office to-morrow morning, enquire into the whole matter, and write you again–5 as to the report you saw in the Baltimore paper, on enquiry, I think it must have been a report of the Senate. No such bill has passed the House; but Breese says he reported such a bill to the Senate, which he supposes has passed that body.
I think I wrote you once before, that I thought no such bill could become a law, and gave my reasons for the opinion– Lest I am mistaken in my recollection, I now give you those reasons briefly– The justice of such a law rests upon the principle that every township should have a section of equal value with every other
<Page 2>
township, in proportion to its capacity for population. Now, to adopt this principle, and practically apply it, would entirely break up the present system, in relation to school sections, and require an amount of agencies and labor, more than equal in expense to the whole expense of the present land system. Seeing this, members of Congress are disinclined to do a very little, and leave undone very much, of a matter all standing on the same principle–
It is now obvious, that in the beginning of our land system, one thirty-sixth– of the proceeds of the lands should have been given for school purposes, instead of giving the land itself; and then the States could have distributed the fund or the interest of it equally.
Wisconsin, on coming into the Union, has managed to adopt this plan substantially–6 Should the bill from the Senate, come up in the House, of course I shall not use the above argument, or any other argument, against it; but on the contrary, shall do what I can to have it passed. Still, I doubt its ultimate success–
Yours foreverA. Lincoln–
1Abraham Lincoln did not write or sign this letter, but it is attributed to him.
2Lincoln makes reference to the Whig National Convention, held from June 7-9, which nominated Zachary Taylor as the Whig candidate for president in the 1848 presidential election.
Michael F. Holt, The Rise and Fall of the American Whig Party: Jacksonian Politics and the Onset of the Civil War (New York: Oxford University Press, 1999), 288, 325-26, 329; The Lincoln Log: A Daily Chronology of the Life of Abraham Lincoln, 6 June 1848, http://thelincolnlog.org/Results.aspx?type=CalendarDay&day=1848-06-06; 9 June 1848, http://thelincolnlog.org/Results.aspx?type=CalendarDay&day=1848-06-09; 11 June 1848, http://thelincolnlog.org/Results.aspx?type=CalendarDay&day=1848-06-11.
3Richard S. Thomas’s letter of the 1st has not been located.
4 Federal law policy regarding school land rested on provisions of the Land Ordinance of 1785, which reserved the sixteenth section of each full thirty-six-section township to support public schools within the township. The Land Ordinance of 1785 did not address the issue of fractional townships with no sixteenth sections or partial sixteenth sections, so various state legislatures and Congress often had to pass laws or make special provisions to allow for the sale of fractional sixteenth sections or substitute sections for public education. In May 1826, Congress enacted a general law governing the appropriation of lands for the support of schools for which provision had not already been made.
During the first session of the Thirtieth Congress, Thomas and numerous other citizens from Cass County, Illinois, sent a petition to Congress requesting a law allowing the county, which had townships with worthless sixteenth sections or fractional townships without sixteenth sections, to select other land in lieu thereof, and the lands to be selected to be granted by the United States to the state of Illinois for the use of the inhabitants for schools. On March 30, Lincoln wrote Thomas that the House of Representatives had referred the petition to the Committee on Public Lands.
“An Act to Appropriate Lands for the Support of Schools in Certain Townships and Fractional Townships, Not Before Provided for,” 20 May 1826, Statutes at Large of the United States 4 (1846):179; An Act Providing for the Sale of the Fractional Sixteenth Section, in Township Six North, Range Twelve West, and Such other Lands as Have Been Selected in Lieu of the Sixteenth Section in the Fractional Townships, on the Mississippi and Illinois Rivers, in Green County; An Act Granting a Half Section of Land for the Use of Schools within Fractional Township 19, South of Range 18 West, County of Lowndes, State of Mississippi.
5Lincoln did venture to the General Land Office to make the inquiry. Lincoln wrote Thomas on June 15 and supplied him a copy of the 1826 law by virtue of which, the inhabitants of fractional Townships, on which there were no sixteenth sections, or in which those sections were fractional, and proportionally too small for the remainder of such townships respectively, may have other lands in lieu thereof.
Richard M. Young to Abraham Lincoln.
6Section seven, sub-section one of the act enabling the citizens of the Wisconsin Territory to write a constitution and form a state government dealt with lands reserved for schools. Congress passed the act admitting Wisconsin into the Union on May 29, 1848.
“An Act to Enable the People of the Wisconsin Territory to form a Constitution and State Government, and for the Admission of Such State into the Union,” 6 August 1846, Statutes at Large of the United States 9 (1862):58.