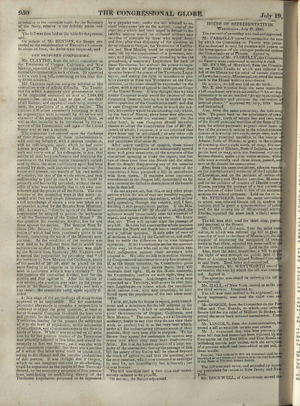 Report of Legislative Proceeding regarding a Bill to Establish Certain Post Routes, 19 July 1848
Mr. LINCOLN, from the same committee, reported a bill to establish certain post routes.
Mr. L. explained that this was precisely the same bill that had heretofore been reported by the Committee on the Post Office and Post Roads establishing certain post routes, with the exception of a proviso which had been added at the end, in these words:
Provided, That nothing in this act contained shall be so construed as to express any opinion as to the true boundary of any State or Territory named therein.1
The bill was read twice, and amended by inserting provisions for routes in New Jersey and New York.2
1This proviso was added to the end of the bill that Abraham Lincoln introduced. It was the result of a long battle in the House of Representatives over post roads and routes legislation arising out of the aftermath of the Mexican War. On February 29, 1848, The House Committee on the Post Office and Post Roads, of which Lincoln was a member, introduced a bill to establish post routes. The House re-submitted the bill to the Committee on the Post Office and Post Roads, and on May 16, the committee reported back the bill with amendments. Included in this amended bill was an amendment adding postal routes in Texas to the Rio Grande River--amendments that generated heated debate about the border of Texas. These debates led to disagreements about the geographical extent of American acquisitions from the Mexican War, and the Wilmot Proviso--disagreements that threatened to scuttle the entire legislation. On May 30, the House re-committed the bill to the Committee on the Post Office and Post Roads. On June 14, the committee reported back the bill with further amendments. The House further amended the bill, and ordered the bill engrossed. Several Whig representatives moved to re-consider the vote upon engrossment, arguing in part that the bill as engrossed contained provisions extending the boundary of Texas to Santa Fe and the Upper Rio Grande--territory in dispute claimed by what would become the New Mexico Territory. Endorsement of Texas’s claim to a boundary on the Rio Grande would have allowed slavery to move further west into acquisitions from Mexico, blunting the Wilmot Proviso. The House delayed action on re-consideration until June 21, when William L. Goggin, chairman of the Committee on the Post Office and Post Roads, proposed the proviso disavowing any opinion on the boundary issue as a means to save the bill. This led to additional debate, and the House refused to re-consider the engrossment by a vote of 88 yeas to 87 nays, with Lincoln voting yea. The House also refused to table the bill, with Lincoln voting nay. Additional debate occurred on June 26, but the House never read the bill a third time.
U.S. House Journal. 1848. 30th Cong., 1st sess., 467, 803, 855, 894-95, 916, 931-34, 955; Cong. Globe, 30th Cong., 1st Sess., 398, 771, 835, 859-61, 872 (1848); Abraham Lincoln to Horace Greeley; New-York Daily Tribune, 23 June 1848, 2:4; 26 June 1848, 2:2, 5; J. J. Bowden, “The Texas-New Mexico Boundary Dispute Along the Rio Grande,” The Southwestern Historical Quarterly 63 (October 1959): 224-28; Herbert Howe Bancroft, The Works of Hubert Howe Bancroft Volume 16: History of the North Mexican States and Texas (San Francisco: History Company, 1889), 2:399-401.
2The House ordered the bill read and engrossed and, after reading it a third time, passed it as amended. Lincoln moved to re-consider the vote, but the House tabled his motion. On August 11, the Senate approved the bill with amendments. The House approved some of the Senate amendments, but disagreed with others, and amended the Senate amendments. The Senate, on August 12, accepted the House amendments to their amendments and receded from others. The act, which included the proviso about boundaries in section two and routes in Texas to the Rio Grande, became law on August 14.
Cong. Globe, 30th Cong., 1st Sess., 950-51 (1848); U.S. House Journal. 1848. 30th Cong., 1st sess., 1069, 1261, 1267, 1272, 1282; U.S. Senate Journal. 1848. 30th Cong., 1st sess., 480, 548, 555, 560, 568-72, 579, 580.

Report of Legislative Proceeding regarding a Bill to Establish Certain Post Routes. [1848-07-19]. /documents/D200514. The Papers of Abraham Lincoln Digital Library.