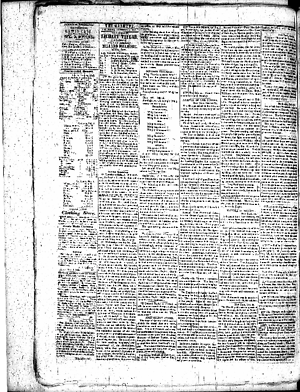 Summary of Speech at Lacon, Illinois, 1 November 18481
On Wednesday evening Dr. Henry, the whig Elector for the Sangamon District, and Hon. A. Lincoln, addressed a numerous assemblage of our citizens from all parts of the county. Dr. H. took up the same subjects that were discussed by Mr. Knowlton; and upon them made a speech of much force and power.2 Mr. Lincoln followed him, with one of his most brilliant efforts. His main purpose was to show that the peace and prosperity of the country, and the limitation of slavery depended upon the election of a Whig Congress and Gen. Taylor; that the Old Hero, whose fidelity to whig principles none should now doubt, had pledged himself to carry out the will of the people, through their representatives, without interposing the veto power.3 He declared that the contest was between Taylor and Cass—that he doubted that Van Buren would get even one State, except perhaps the little state of Wisconsin;4 and admonished all “Liberty” or Van Buren men, by the history of Texan Annexation to cast their votes for Gen. Taylor, and not indirectly for Gen. Cass, who has avowed his favor of the unlimited exercise of the veto power, and as a probably consequence if elected, to the unbounded extension of slavery, &c.[etc.]5 He scored with the most scathing language, that “consistency” of the Abolitionists, which, while they professed great horror at the proposed extension of slave territory, they aided in the election of Mr. Polk; for which, and its disastrous consequences, they were responsible, as they held the balance of power.6
After listening about four hours to the gentlemen, the audience retired, highly entertained and instructed with the strong array of facts and illustrations presented.
1At the end of the first session of the Thirtieth Congress, Lincoln spent eleven days in Massachusetts stumping for Zachary Taylor for president in the 1848 federal election. He then returned to Illinois via the Great Lakes and the Illinois River, arriving in Chicago on October 5. Lincoln spent most of October canvassing his congressional district on behalf of Taylor and the Whig Party. The day before this address, Lincoln spoke at Magnolia and Hennepin, Illinois.
Michael Burlingame, Abraham Lincoln: A Life (Baltimore: The Johns Hopkins University Press, 2008), 1:280-84; The Lincoln Log: A Daily Chronology of the Life of Abraham Lincoln, 31 October 1848, http://www.thelincolnlog.org/Results.aspx?type=CalendarDay&day=1848-10-31.
2On October 31, 1848, Lincoln B. Knowlton, a Taylor elector from the Ninth Judicial Circuit, made a speech espousing the Whig cause at the Marshall County Court House.
Illinois Gazette (Lacon), 4 November 1848, 2:2-3.
3Ever since President Andrew Jackson made broad use of the veto power to reject internal improvements, a National Bank, and other parts of Henry Clay’s American System, the Whigs had railed against “executive usurpation.” Congressional supremacy became a mantra for the Whig Party, and Whig orators made what they deemed unconstitutional use of the veto power by Jackson's successors a theme in most elections up to 1848. In the presidential campaign of 1848, Whigs sought to mobilize their supporters and gain neutral voters by claiming that Lewis Cass would continue James K. Polk’s unconstitutional usurpation of power, particularly in commencing and waging the Mexican War.
Norma Lois Peterson, The Presidencies of William Henry Harrison & John Tyler (Lawrence: University Press of Kansas, 1989), 14, 89-90, 97; Michael F. Holt, The Rise and Fall of the American Whig Party: Jacksonian Politics and the Onset of the Civil War (New York: Oxford University Press, 1999), 27-30, 49, 60, 67, 69, 110, 128, 130-34, 137-39, 146-50, 166, 350-51.
4Former President Martin Van Buren was the candidate of the Free Soil Party. Van Buren would not win a single electoral vote in the election.
Michael F. Holt, The Rise and Fall of the Whig Party, 368.
5Lincoln is mostly like suggesting that Cass would be more likely than Taylor to veto the Wilmot Proviso or other congressional action prohibiting slavery in territory acquired from Mexico.
6Lincoln referenced James K. Polk defeating Henry Clay in the presidential election of 1844--a victory that some Whigs attributed to the Liberty Party and the refusal of abolitionists to vote for Clay, though other Whigs blame Clay’s loss in his waffling on the annexation of Texas.
Michael F. Holt, The Rise and Fall of the Whig Party, 195-96; Paul H. Bergeron, The Presidency of James K. Polk (Lawrence: University Press of Kansas, 1987), 19-20.