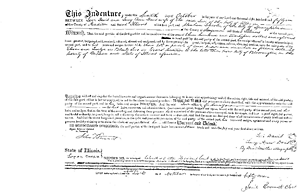 Deed of Levi Davis and Lucy Ann Davis to Abraham Lincoln, 6 October 18511
This Indenture,2 made thisSixthday ofOctoberin the year of our Lord one thousand eight hundred andfiftyoneBETWEENLevi Davis and Lucy Ann Davis wife of said Levi, of the City of Alton, inof the County ofMadisonand State ofIllinoisof the first part, andAbraham Lincoln, of the City of Springfield, inof the County of Sangamonand the State ofIllinoisof the second part.
Witnesseth, That the said partiesof the first part for and in consideration of the sum ofthree hundred and twentyfive dollars, and eight cents.
[...?] in hand paid by the said partyof the second part, the receipt whereof is hereby acknowledged, ha vegranted, bargained, sold, remised, released, aliened and confirmed, and by these presents do grant, bargain, sell, remise, release, alien and confirm, unto the said partyof the second part, and tohisheirs and assigns forever, ALLthose lots or parcels of land known and described as follows, towit– Lots Eleven and Twelve in Block Two in Evans' Addition to the late town now City of Bloomington, in the County of McLean and State of Illinois aforesaid–
Together with all and singular the hereditaments and appurtenances3 thereunto belonging, or in any wise appertaining: and all the estate, right, title and interest, of the said partiesof the first part, either in law or equity, of, in and to the above bargained premises: TO HAVE AND TO HOLD said premises as above described, with the appurtenances unto the said partyof the second part, and tohisheirs and assigns FOREVER. And the saidLevi Davis, for himself, andforhisheirs, executors, and administrators, doescovenant, grant bargain and agree, to and with the said partyof the second part, andhisheirs and assigns, that at the time of the insealing and delivering these presentshe iswell seized of the premises above conveyed, as in fee simple, and hasa good right, full power, and lawful authority, to grant, bargain, sell and convey the same in manner and form as aforesaid; and that the same are free and clear of all incumbrances of every kind and nature soever. And that the above bargained premises, in the quiet and peaceable possession of the said partyof the second part,hisheirs and assigns, against all and every person or persons, lawfully claiming or to claim the whole or any part thereof,hewill forever Warrant and Defend.
IN TESTIMONY WHEREOF, the said partiesof the first part havehereunto settheirhands and seals the day and year first above written.4
Signed, Sealed and Delivered in Presence of
John T. StuartLevi Davis
seal Lucy Ann Davis
seal By David Davis their attorney in fact
seal
[certification]
10/06/1851
Lincoln, Abraham (President)Emmitt, Samuel
BEFORE ME, the undersignedClerk of the Circuit Courtin and for the County and State aforesaid, personally appearedDavid Davis5who is personally known to me to be the real person whose name is subscribed to the forgoing deed as having executed the sameas attorney in fact for said Levi Davis and Lucy Ann Davis6and acknowledged the same to be his act and deed, for the purposes therein expressed. [...?] and the same day and place arewho is personally known to me to be the wife of the saidand the real person whose name is subscribed to said Deed as having executed the same, and having been by me examined separate and apart from her said husband and made acquainted with the contents thereof, acknowledged that she has executed the same, freely and voluntarily, and relinquished her right of dower to the premises therein contained without fear of compulsion by her said husband.
GIVEN under my hand and seal& of office7thisSixthday ofOctoberin the year of our Lord, one thousand eight hundred andfifty one–
Sam’l Emmitt Clerk8
1Abraham Lincoln wrote all of the script which appears in the blanks on the form, up until the testimony section beginning with the text “In Testimony Whereof.” He also wrote some of the script in the form’s final section, each instance of which is noted separately below.
2Historically, the word “indenture” referred to the crimps made in the original and copies of a document to prove the authenticity of the copies at a later date. Eventually, the word became synonymous with deeds, and particularly to real property transaction deeds in which both parties assumed obligations, which is the context within which the word is used here.
“Indenture,” Reference, Glossary, Martha L. Benner and Cullom Davis et al., eds., The Law Practice of Abraham Lincoln: Complete Documentary Edition, 2d edition (Springfield: Illinois Historic Preservation Agency, 2009), http://www.lawpracticeofabrahamlincoln.org/Reference.aspx?ref=Reference%20html%20files/Glossary.html.
3In legal terminology, hereditaments are “things capable of being inherited,” and an appurtenance refers to “that which belongs to something else,” and “which passes as incident to it.”
Henry Campbell Black, A Dictionary of Law (St. Paul, MN: West, 1891), 83, 568.
4No additional documents related to Lincoln’s purchase of this land in Bloomington, Illinois have been located.
5Lincoln wrote this script.
6Lincoln wrote this added script.
7Lincoln wrote this inserted script.
8Samuel Emmitt wrote the script “Sixth,” “October,” and “fifty one–” in this endorsement. He also signed his name, followed by the word “Clerk.”