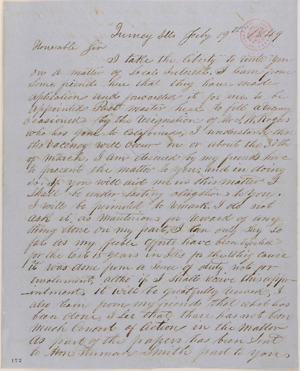 Harrison Dills to Abraham Lincoln, 19 February 18491
Quincy Ills Feby 19th 1849Honerable Sir
I take the liberty to write you on a matter of local Interest. I learn from some friends here that they have made aplication and forwarded it for me, to be appointed Post master here to fill a vacency ocasioned by the resignation of Mr S. W. Rogers who has gone to Calafornia, I understand that the vacency will occur on or about the 30th of March. I am desired by my friends here to present the matter to you, and in doing so, If you will aid me in this matter I shall be under lasting obligation to you. I will be permited to remark I do not ask it, as maritorious for reward of any thing done on my part. I can only say So far as my feeble efforts have been exerted for the last 15 years in Ills for the Whig cause it was done from a Sense of duty not for emolument, altho[although] if I Shall receive this appointment, it will be greatfully received. I also learn from my friends that what has been done. I See that thare has not been much Concert of Action in the matter as part of the papers has been Sent to Hon Truman Smith part to you,
<Page 2>
and part to the Hon R. W. Thompson & George. G. Dunn of Ina2 I feel very greatful for the efforts of my friends in this matter, and shall also to you if you will present the matter to the proper department, this office is one maid by the President & Senate I Should have writen to Col Baker As I learn he will be thare before Congress adjorns, but I believe he has a friend here, for whom he wishes this office. I wish of you would see him. I feel it due to say that thare has been a publick meeting here on the subject the object of which ^I learn^ was to recommend Mr Jonas a first rate man but he was rejected by the meeting and a man by the name of L. Prentiss was nominated he received 34 Democrat votes & 4 or 5 Whigs is the way it is told. I was not thare but the Chairman of the meeting informed me so and the other part took up another man who received 34 Whigs. I suppose this matter is before you [?] this. I believe from what I can learn, I am recomended to prevent a split among us supposing it will render more general satisfaction but this I should leave for others.3
I am Sir Obt[Obedient] ServantHarrison DillsHon A. LincolnWashington
<Page 3>
P. S. I have not seen but one of the Petitions it was headed by Mr Lovejoy and Dehaven Mr A. R. Parker a Clerk in the genl Land office is a son inlaw of Mr Dehaven from ^whom^ you can get any Information you may desire, if it will not be asking too much of you please see HimH. Dills4
1Dills wrote this letter in its entirety.
2The petitions and papers sent to Lincoln have not been found.
3A group of Quincy citizens held this public meeting on Saturday, February 10, for the express purpose of finding candidates the offices of postmaster and receiver and register of the General Land Office. In the contest for postmaster, Lyman Prentiss and James Adams were the top two candidates, and in a vote between the two, Prentiss received thirty-eight votes and Adams thirty-four. The Quincy Whig reported that the Democrats voted for Prentiss and the Whigs for Adams. Whig editors agreed that the Democrats participated in the meeting to divide the Whigs and create confusion.
Quincy Whig (IL), 13 February 1849, 3:1.
4Lincoln apparently responded to this letter on April 4, 1849, as mentioned by Dills in a return letter dated April 10. Lincoln’s letter, however, has not been found.
Dills did not receive the appointment; Abraham Jonas became postmaster on April 23, 1849, and served until 1852. In May 1865, Dills would become postmaster.
Record of Appointment of Postmasters, 1832-Sept. 30, 1971, vol. 1845-1855, 2, microfilm publication M841, roll 27, 2, RG28: Records of the Post Office Department, Record of Appointment of Postmasters, 1832-1971, National Archives Building, Washington, DC; Register of all Officers and Agents, Civil, Military, and Naval, in the Service of the United States, on the Thirtieth September, 1849 (Washington, DC: Gideon, 1849), 86; Register of all Officers and Agents, Civil, Military, and Naval, in the Service of the United States, on the Thirtieth September, 1851 (Washington, DC: Gideon, 1851), 546; Register of Officers and Agents, Civil, Military, and Naval, in the Service of the United States, on the Thirtieth September, 1865 (Washington, DC: Government Printing Office, 1865), 70*; Nomination of Harrison Dills as Deputy Postmaster at Quincy, Illinois.