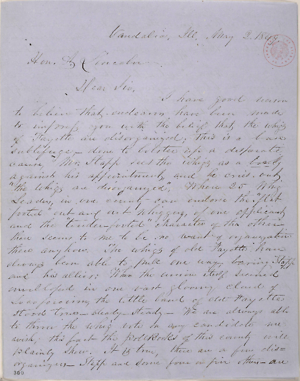 James Kennaday to Abraham Lincoln, 2 May 18491
Vandalia, Ill, May 2. 1849,Hon. A. LincolnDear Sir,
I have good reason to believe that endeavors have been made to impress you with the belief that the whigs of Fayette are disorganized; this is a base subtifuge,— done to bolster up a desperate cause, Mr Stapp sees the whigs as a [body?] against his appointment, and he cries out "the whigs are disorganized", Where 25 Whig Leaders, in one county can endorse the "flat footed" out and out whiggery, of one applicant and the "tender-footed" character of the other there seems to me to be no want of organization there any how. The whigs of old Fayette have always been able to pull one way, baring Stapp and his allies; When the union itself seemed envelloped in one vast gloomy cloud of Locofocoism, the little band of old Fayette stood true—steady—steady– We are always able to throw the whig vote on any candidate we wish; this fact the Poll Books of this county will plainly show. It is true, there are a few disorganizers—Stapp and some four or five others—are
<Page 2>
regular Bolters, hence the protest against his appointment, as a genuine whig. It is not pleasant to protest in that way, against an old associate, but—
"Men must be brief
When Traitors take the field."2
During the Clay campaign Stapp done his duty, he wanted the honor of attending the Baltimore convention, and having the money, we, Alexander and myself through the "Free Press" got him the appointment–3 The whigs, were beaten, from high hopes of victory, the whig party was compelled to feel a miserable defeat,– miserable, from the fact, that one of the mightiest minds in Christendom, was discomfited, by a shallow ripple on Duck River,–4 Hope, was almost dead and some whigs ceased to live (as whigs) they went over to the enemy, some halted, and played te-te to-ta, (stood in the middle of the plank and worked both ends)—such was Mr Stapps course in this county. The locos would, indeed, have fine chuckling over his appointment. All the whig leaders, have put their names to Remann's petition and signed the remonstrance—it was presumed, that was all that was wanted—as we understood, an expression of this kind would have its bearing. As goes the names on Col.[Colonel] R's petition, so goes the whig crowd in this county–
<Page 3>
I gave my first vote ^in N. York^ for J. Q. Adams, vs. Andrew Jackson;5 and have never "backed water" since from constable up to President Taylor. If bolters are to be fattened up with offices, from the general Government, it is poor encouragement for whigs who never ask for office, to keep up a regular organization at home. I have promised the whigs of this county that the acts of a bolter should be brought before you and the general government or that part of it whose duty it is to attend to these things, and I have kept my word; A bolter from the loco foco party in this State, could not get to make the fires in Springfield; and in my humble opinion, the plan is a good one. Dr. Stapp is getting some of the names of the most violent and ignorant locos on his petition; If loco focos are to fill the offices by their recommendation, Mr. Gregory, the present occupant, could present you a host of names. But the idea is preposterous and I will detain you no longer with this epistle hoping you will give Col. R's due consideration
Numerous documents have been forwarded to the Department, which on your arrival there (should you be at Washington) and will have the kindness to examine, must satisfy you that Col. R. is the choice of this county, and the district at Large– and while you are making a worthy appointment, will be accommodating the whig
<Page 4>
party of this county—who will always feel grateful, and when an opportunity occurs will return the favor in good whig style.6
I am putting up materials for a printing office– Documents and any communications, will be received with pleasure, from,
Yours Respectfully & politicallyJas Kennaday
1James Kennaday wrote and signed this letter
2William Shakespeare, Richard III (ca. 1593), Act 4, Scene 3, Line 57.
3James T. B. Stapp represented the Illinois Third Congressional District at the Whig National Convention held in Baltimore in May 1844.
Sangamo Journal (Springfield, IL), 4 January 1844, 2:1; Michael F. Holt, The Rise and Fall of the American Whig Party: Jacksonian Politics and the Onset of the Civil War (New York: Oxford University Press, 1999), 163.
4Reference to James K. Polk, who moved to the Duck River region of Tennessee as a child, and who defeated Henry Clay in the presidential election of 1844.
Walter R. Borneman, Polk: The Man Who Transformed the Presidency and America (New York: Random House, 2008), 7.
5Reference to the presidential election of 1828.
6Stapp and Frederick Remann were vying for the office of receiver at the U.S. General Land Office in Vandalia. Stapp would receive the appointment and hold the position until at least 1851.
Register of all Officers and Agents, Civil, Military, and Naval, in the Service of the United States, on the Thirtieth September, 1849 (Washington, DC: Gideon, 1849), 137; Register of all Officers and Agents, Civil, Military, and Naval, in the Service of the United States, on the Thirtieth September, 1851 (Washington, DC: Gideon, 1851), 141; Illinois Journal (Springfield), 11 July 1849, 1:6; Illinois Daily Journal (Springfield), 4 September 1850, 2:4.