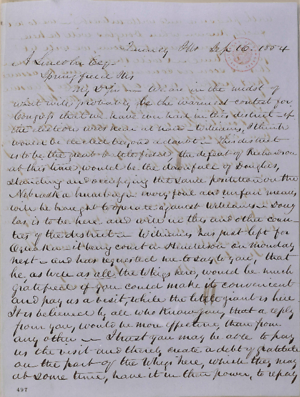 Abraham Jonas to Abraham Lincoln, 16 September 18541
Quincy Ills Sep 16. 1854 A Lincoln Esq[Esquire]Springfield IllsMy Dr[Dear] Sir–
We are in the midst of what will probably be the warmest contest for Congress that we have ever had in this district— if the election was near at hand— Williams, I think would be elected beyond a doubt– This district is to be the great battle field, the defeat of Richardson at this time, would be the downfall of Douglas, standing and occupying the same positition on the Nebraska humbug—2 every foul and unfair means will be brought to operate against Williams– Douglas is to be here and will in this and other counties of the district– Williams has just left for Oquaka— it being court in Henderson on Monday next— and has requested me to say to you, that he, as well as all the Whigs here, would be much gratified if you could make it convenient and pay us a visit, while the little giant is here It is believed by all who know you, that a reply from you, would be more effective, than from any other– I trust you may be able to pay us the visit and thereby create a debt of gratitude on the part of the Whigs here, which they may at some time, have it in their power, to repay
<Page 2>
with pleasure and with interest– we do not exactly know when Douglas will be here— but you can consent to come, we will let you ^know^ in time– I will thank you to answer this as soon as convenient— and be assured that nothing will afford greater pleasure to your personal friends and the Whigs generally than your consent to visit us— and the Douglasites would as soon see old nick here as yourself–3 The present indications here are good– This county will do better, or I am much mistaken, than it has done for many years– Pike will give a decided majority for us– Brown will do as well as on former occasions although Singleton is doing all in his power against us–4 we here favorable from all parts of the district— and I think with your assistance, we can check mate them
Trusting to hear from you soon5
I remain Yrs[Yours] truelyA Jonas
<Page 3>
<Page 4>
[docketing]
Lincoln, Abraham (President)
A. Jonas6
[docketing]
Sept[September] 16/54[1854]7
1Abraham Jonas wrote and signed this letter.
2In 1854, Quincy was in Illinois’ Fifth Congressional District. The Democratic Party won the district in each election since 1842, with Stephen A. Douglas representing the district in the U.S. House of Representatives in the Twenty-Eighth, Twenty-Ninth, and Thirtieth Congresses. After Douglas won election to the U.S. Senate in 1847, Democrat William A. Richardson filled this congressional seat. Richardson was seeking reelection in the congressional election of 1854, running against Archibald Williams, a Whig.
Jonas references Richardson holding the same views as Douglas on the Kansas-Nebraska Act.
Blue Book of the State of Illinois (Springfield: Illinois State Journal, 1919), 501; Biographical Directory of the American Congress 1774-1996 (Alexandria, VA: CQ Staff Directories, 1997), 959; Newton Bateman and Paul Selby, eds., Historical Encyclopedia of Illinois and History of Piatt County, ed. by Francis M. Shonkwiler (Chicago: Munsell, 1917), 2:590.
3Douglas spoke in Quincy, Illinois on Saturday, October 7, 1854. Abraham Lincoln did not speak in Quincy that day, as Jonas requested; he was attending court in Pekin, Illinois. Lincoln spoke in Quincy on November 1, 1854, in an effort to give Williams “a little lift.”
Illinois Daily Journal (Springfield), 13 October 1854, 2:3; The Lincoln Log: A Daily Chronology of the Life of Abraham Lincoln, 7 October 1854, http://www.thelincolnlog.org/Results.aspx?type=CalendarDay&day=1854-10-07; 1 November 1854, http://www.thelincolnlog.org/Results.aspx?type=CalendarDay&day=1854-11-01; Abraham Lincoln to Richard Yates.
4During the 1854 election campaign, rumors circulated that James W. Singleton, a Whig, was speaking out in favor of both the Kansas-Nebraska Act and Douglas. He eventually left the Whig Party and became a Democrat.
Illinois Daily Journal (Springfield), 7 October 1854, 2:3; Abraham Lincoln to Lyman Trumbull; Biographical Directory of the American Congress 1774-1996, 1828.
5Lincoln’s reply, if he penned one, has not been located. In December 1854, Jonas wrote Lincoln another letter about the election.
Passage of the Kansas-Nebraska Act and its effective repeal of the Missouri Compromise reawakened Lincoln’s passion for politics, and he threw himself into the congressional election campaign in the fall of 1854, crisscrossing Illinois to deliver speeches against the Kansas-Nebraska Act and in support of anti-Nebraska candidates such as Williams. He even allowed himself to become a candidate for the Illinois General Assembly (albeit unwillingly at first). As the election campaign reached its climax, Lincoln’s name began to circulate as a possible nominee for one of the state’s U.S. Senate seats.
The race between Richardson and Williams was close, but not as close as Jonas predicted. Richardson won 52.4 percent of the district’s votes to Williams’ 47.6 percent. In Pike County, the Williams emerged with 50.1 percent of the vote to Richardson’s 49.9 percent. In Brown County, Richardson carried 60.9 percent of the vote to Williams’ 39.1 percent.
Lincoln won election to the Illinois General Assembly, but, in late-November 1854, declined to serve in order to run for the U.S. Senate. Ultimately, he did not win election to the U.S. Senate; the Illinois General Assembly selected anti-Nebraska Democrat Lyman Trumbull instead. See the 1854 Federal Election.
David Herbert Donald, Lincoln (New York: Touchstone, 1995), 167-73; Autobiography of Abraham Lincoln Written for John L. Scripps; Howard W. Allen and Vincent A. Lacey, eds., Illinois Elections, 1818-1990 (Carbondale and Edwardsville: Southern Illinois University Press, 1992), 10, 134-35; Illinois Daily Journal (Springfield), 10 November 1854, 2:5; William H. Randolph to Abraham Lincoln; Abraham Lincoln to Noah W. Matheny; Michael Burlingame, Abraham Lincoln: A Life (Baltimore: The Johns Hopkins University Press, 2008), 1:392, 401-2.
6Lincoln wrote this docketing.
7An unknown person wrote this docketing.