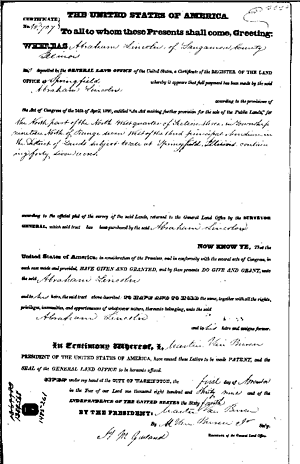 Land Patent of the United States to Abraham Lincoln, 1 November 18391
THE UNITED STATES OF AMERICA.
CERTIFICATE
No.15,707
To all to whom these Presents shall come, Greeting:
WHEREASAbraham Lincoln, of Sangamon County Illinoishas deposited in the GENERAL LAND OFFICE of the United States, a Certificate of the REGISTER OF THE LAND OFFICE atSpringfieldwhereby it appears that full payment has been made by the said Abraham Lincoln,according to the provisions of the Act of Congress of the 24th of April, 1820, entitled “An Act making further provision for the sale of the Public Lands,”2 forThe North part of the North West quarter of Section three, in Township nineteen North, of Range seven West of the third principal Meridian, in the District of Lands subject to sale at Springfield, Illinois, containing forty seven acres,according to the official plat of the survey of the said Lands, returned to the General Land Office by the SURVEYOR GENERAL, which said tract has been purchased by the saidAbraham Lincoln3
NOW KNOW YE, That the United States of America, in consideration of the Premises, and in conformity with the several acts of Congress, in such case made and provided, HAVE GIVEN AND GRANTED, and by these presents DO GIVE AND GRANT, unto the saidAbraham Lincolnand tohisheirs, the said tract above described: TO HAVE AND TO HOLD the same, together with all the rights, privileges, immunities, and appurtenances of whatsoever nature, thereunto belonging, unto the saidAbraham Lincolnand tohisheirs and assigns forever.
In Testimony Whereof, I, Martin Van BurenPRESIDENT OF THE UNITED STATES OF AMERICA, have caused these Letters to be made PATENT, and the SEAL of the GENERAL LAND OFFICE to be hereunto affixed.
GIVEN under my hand at the CITY OF WASHINGTON, thefirstday ofNovemberin the Year of our Lord one thousand eight hundred and thirty nineand of the INDEPENDENCE OF THE UNITED STATES the Sixtyfourth
BY THE PRESIDENT:Martin Van Buren
ByM Van Buren JrSec’y.H M Garland Recorder of the General Land Office.4
1This partially printed land patent was filled in by Martin Van Buren, Jr. and signed by Van Buren Jr. and Hudson M. Garland.
2Statutes at Large of the United States, 3 (1846):566.
3Abraham Lincoln purchased this land on March 16, 1836. The property was in Menard County, north of Petersburg on the right bank of the Sangamon River near Salt Creek, one mile east of the town site for Huron, which Lincoln surveyed in May 1836.
Illinois Public Domain Land Tract Sales, Menard County, 69:85, Illinois State Archives, Springfield, IL.
4On May 9, 1837, Lincoln sold an undivided half interest in this property for $30 to Gershom Jayne. Lincoln retained the other half until October 27, 1848, when he, Jayne, and their wives gave a warranty deed for the property to Pleasant Armstrong and John Yardly for $100.
Harry E. Pratt, The Personal Finances of Abraham Lincoln (Springfield, IL: Abraham Lincoln Association, 1943), 59.